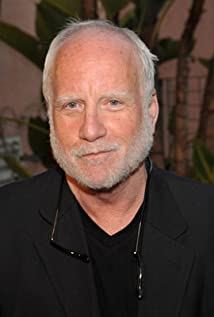 Richard Dreyfuss is an American leading man, who has played his fair share of irritating pests and brash, ambitious hustlers.He was born Richard Stephen Dreyfus in Brooklyn, New York, to Geraldine (Robbins), an activist, and Norman Dreyfus, a restaurateur and attorney. His paternal grandparents were Austro-Hungarian Jewish immigrants, and his mother's family was Russian Jewish.Richard worked his way up through bit parts (The Graduate (1967), for one) and TV before gaining attention with his portrayal of Baby Face Nelson in John Milius' Dillinger (1973). He gained prominence as a college-bound young man in American Graffiti (1973) and as a nervy Jewish kid with high hopes in The Apprenticeship of Duddy Kravitz (1974). By the latter part of the 1970s Dreyfuss was established as a major star, playing leads (and alter-egos) for Steven Spielberg in two of the top-grossing films of the that decade: Jaws (1975) and Close Encounters of the Third Kind (1977). He won a Best Actor Oscar in his first romantic lead as an out-of-work actor in The Goodbye Girl (1977). Dreyfuss also produced and starred in the entertaining private eye movie The Big Fix (1978). After a brief lull in the early 1980s, a well-publicized drug problem and a string of box-office disappointments (The Competition (1980), Whose Life Is It Anyway? (1981), The Buddy System (1984)), a clean and sober Dreyfuss re-established himself in the mid-'80s as one of Hollywood's more engaging leads. He co-starred with Bette Midler and Nick Nolte in Paul Mazursky's popular Down and Out in Beverly Hills (1986). That same year he provided the narration and appeared in the opening and closing "bookends" of Rob Reiner's nostalgic Stand by Me (1986). He quickly followed that with Nuts (1987) opposite Barbra Streisand, Barry Levinson's Tin Men (1987) in a memorable teaming with Danny DeVito, and Stakeout (1987) with Emilio Estevez. Dreyfuss continued working steadily through the end of the 1980s and into the 1990s, most notably in Mazursky's farce Moon Over Parador (1988), Spielberg's Always (1989), Postcards from the Edge (1990) and Rosencrantz & Guildenstern Are Dead (1990). He appeared as a member of an ensemble that included Holly Hunter, Gena Rowlands and Danny Aiello in the romantic comedy Once Around (1991) and as a pop psychiatrist, the author of several successful self-help books, who is driven to the edge by nutcase Bill Murray in the popular comedy What About Bob? (1991). Dreyfuss has also remained active in the theater ("Death and Maiden", 1992) and on TV. In his next project he starred the thriller Silent Fall (1994) with John Lithgow and Linda Hamilton, being the film debut of Liv Tyler, Steven Tyler's daughter (Aerosmith's lead vocals). Just later Dreyfuss made Another Stakeout (1993), sequel of Stakeout (1987) where was team again with Emilio Estevez accompanied of Rosie O'Donnell, the adaptation of Neil Simon's play Lost in Yonkers (1993) and followed with a supporting turn as the querulous political opponent in The American President (1995). Dreyfuss received some of the best notices of his career as a determined, inspiring music teacher coping with a deaf son and the demands of his career in Mr. Holland's Opus (1995). Closing the 20th century he was in Sidney Lumet's Night Falls on Manhattan (1996) with Andy Garcia, the crime comedy Mad Dog Time (1996) as the mob boss Vic, the screwball comedy Krippendorf's Tribe (1998) about an anthropologist who creates a false lost New Guinea tribe for not losing his job in the university, TV movie Lansky (1999) about the infamous mob boss to end, the too TV movie Fail Safe (2000) playing The President, and The Crew (2000), about four older mobsters retired in Miami, partnering with Hollywood legends Burt Reynolds, Dan Hedaya and Seymour Cassel.His start in the 21st century was with the adaption of Luis Sepúlveda's novel The Old Man Who Read Love Stories (2001), playing an old man to must to hunt a female jaguar turned crazy. It was followed by the supporting apparition in the comedy Who Is Cletis Tout? (2001) and another TV movie about 1981 Ronald Reagan's shooting The Day Reagan Was Shot (2001). After the short-lived TV series The Education of Max Bickford (2001) about a teacher in a women's college where his daughter is student, Dreyfuss returned to cinema in Silver City (2004) and the box-office bomb Poseidon (2006) with Kurt Russell, Emmy Rossum and Josh Lucas. Playing former vice-president Dick Cheney in the Oliver Stone's biopic W. (2008) and Irv, the cunning tourist in Greece turned in assistant of a troubled tour guide in My Life in Ruins (2009), Dreyfuss participated in low-budget productions as Leaves of Grass (2009) and The Lightkeepers (2009), for making a cameo in the wild and crazy Piranha 3D (2010) about prehistoric men-eater piranhas that make a bloodbath in a spring break. Returning to first line playing evil Alexander Dunning in the actioner RED (2010), his further productions included Paran

Daughter of the Wolf