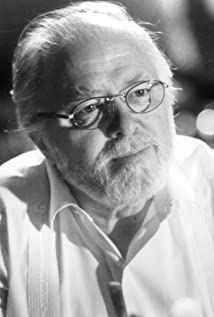 Richard Attenborough, Baron Attenborough of Richmond-upon-Thames, was born in Cambridge, England, the son of Mary (née Clegg), a founding member of the Marriage Guidance Council, and Frederick Levi Attenborough, a scholar and academic administrator who was a don at Emmanuel College and wrote a standard text on Anglo-Saxon law. The family later moved to Leicester where his father was appointed Principal of the university while Richard was educated at Wyggeston Grammar School for Boys in Leicester and at the Royal Academy of Dramatic Art (RADA).His film career began with a role as a deserting sailor in In Which We Serve (1942), a part that contributed to his being typecast for many years as a coward in films like Dulcimer Street (1948), Operation Disaster (1950) and his breakthrough role as a psychopathic young gangster in the film adaptation of Graham Greene's novel, Brighton Rock (1947). During World War II, Attenborough served in the Royal Air Force.He worked prolifically in British films for the next 30 years, and in the 1950s appeared in several successful comedies for John Boulting and Roy Boulting, including Private's Progress (1956) and I'm All Right Jack (1959). Early in his stage career, Attenborough starred in the London West End production of Agatha Christie's "The Mousetrap", which went on to become one of the world's longest-running stage productions. Both he and his wife were among the original cast members of the production, which opened in 1952 and (as of 2007) is still running.In the 1960s, he expanded his range of character roles in films such as Seance on a Wet Afternoon (1964) and Guns at Batasi (1964), for which he won the BAFTA Award for Best Actor for his portrayal of the regimental Sergeant Major. He appeared in the ensemble cast of The Great Escape (1963), as Squadron Leader "Roger Bartlett" ("Big X"), the head of the escape committee.In 1967 and 1968, he won back-to-back Golden Globe Awards in the category of Best Supporting Actor, the first time for The Sand Pebbles (1966), starring Steve McQueen, and the second time for Doctor Dolittle (1967), starring Rex Harrison. He would win another Golden Globe for Best Director, for Gandhi (1982), in 1983. Six years prior to "Gandhi", he played the ruthless "Gen. Outram" in Indian director Satyajit Ray's period piece, The Chess Players (1977). He has never been nominated for an Academy Award in an acting category.He took no acting roles following his appearance in Otto Preminger's The Human Factor (1979), until his appearance as the eccentric developer "John Hammond" in Steven Spielberg's Jurassic Park (1993). The following year, he starred as "Kris Kringle" in Miracle on 34th Street (1994), a remake of the 1947 classic. Since then, he has made occasional appearances in supporting roles, including the historical drama, Elizabeth (1998), as "Sir William Cecil".In the late 1950s, Attenborough formed a production company, "Beaver Films", with Bryan Forbes and began to build a profile as a producer on projects, including The League of Gentlemen (1960), The Angry Silence (1960) and Whistle Down the Wind (1961), also appearing in the first two of these as an actor.His feature film directorial debut was the all-star screen version of the hit musical, Oh! What a Lovely War (1969), and his acting appearances became more sporadic - the most notable being his portrayal of serial killer "John Christie" in 10 Rillington Place (1971). He later directed two epic period films: Young Winston (1972), based on the early life of Winston Churchill, and A Bridge Too Far (1977), an all-star account of Operation Market Garden in World War II. He won the 1982 Academy Award for Directing for his historical epic, Gandhi (1982), a project he had been attempting to get made for many years. As the film's producer, he also won the Academy Award for Best Picture. His most recent films, as director and producer, include Chaplin (1992), starring Robert Downey Jr. as Charles Chaplin, and Shadowlands (1993), based on the relationship between C.S. Lewis and Joy Gresham. Both films starred Anthony Hopkins, who also appeared in three other films for Attenborough: "Young Winston", "A Bridge Too Far" and the thriller, Magic (1978).Attenborough also directed the screen version of the hit Broadway musical, "A Chorus Line" (A Chorus Line (1985)), and the apartheid drama, Cry Freedom (1987), based on the experiences of Donald Woods. He was nominated for a Golden Globe Award for Best Director for both films. His most recent film as director was another biographical film, Grey Owl (1999), starring Pierce Brosnan.Attenborough is the President of RADA, Chairman of Capital Radio, President of BAFTA, President of the Gandhi Foundation, and President of the British National Film and Television School. He is also a vice patron of the Cinema and Television Benevolent Fund.He is also the patron of the UWC movement (United World Colleges), whereby he continually contributes greatly to the college

Jack and the Beanstalk: The Real Story

Joseph and the Amazing Technicolor Dreamcoat

The Making of 'Jurassic Park'