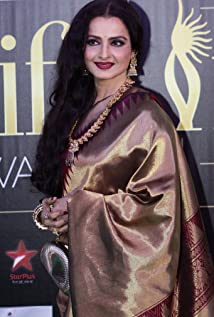 Bhanurekha was born in the Tamil-speaking Ganesan household on October 10, 1954. Her dad was the popular Tamil actor, Gemini, while her mom was a popular Telugu actress, Pushpavalli. She has seven sisters and one brother. One of her sisters is Dr. Kamala Selvaraj, while another one, Radha, lives in San Francisco with a son named Naveed, who is being readied to act in Bollywood movies.No stranger to the tinsel screen, Bhanurekha acted in a Telugu movie 'Rangula Ratnam' as Baby Bhanurekha along with her mom during 1966, which was subsequently re-made and released in Hindi during 1976 as Rangila Ratan (1976). She acted in one more Telugu as well as one Kannada movie (Amma Kosam and Goadalli CID 999 respectively) before re-locating to Bombay.Due to her background, she ended up being very gloomy and pessimistic during her early years. She get a chance to debut in Bollywood movies during 1970 with Sawan Bhadon (1970) opposite Navin Nischol with a screen name of Rekha. Inability to speak Hindi, a dusky complexion as well as her weight did not exactly add to her assets in a predominantly fair-skinned, Hindi-speaking North-Indian film industry.She decided to take matters seriously, took Yoga, shed those extra pounds, learned Hindi and dancing, and thus was born a new and much improved Rekha - who went on to deliver one box office hit after another for example Nagin (1976), Muqaddar Ka Sikandar (1978), Mr. Natwarlal (1979), Khubsoorat (1980), Umrao Jaan (1981), Khoon Bhari Maang (1988) amongst others. In her later years she has taken up character roles and appeared as a mother, even a grandmother in Krrish (2006).Her slim, slender looks got her many admirers, including well established Bollywood actors such as Kiran Kumar , Jeetendra, Vinod Mehra, and Amitabh Bachchan'. In 2004, in a television interview with Simi Garewal, she rejected a long-standing rumor that she was once married to Vinod Mehra. She referred to him as a well-wisher and stated that her only marriage was to a businessman, Mukesh Aggarwal. This marriage ended when Mukesh killing himself shortly thereafter, leaving her a widow. She has never remarried.She likes to surf the Internet, has written biographies of actresses like Zeenat Aman, and Salma Agha on IMDb, likes to collect old photographs and postcards, mimic people, watch movies, and practices Yoga regularly, read comics like Archie and Dennie the Menace, and is a vegetarian. She now lives with her Secretary, Farzana, and pets in a self-owned bungalow in Bandra (West)in Mumbai.

Aastha: In the Prison of Spring