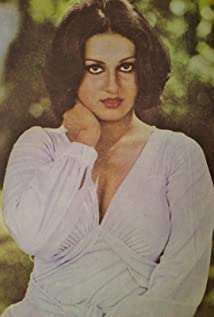 Reena Roy was a famous leading lady of Hindi films from 1972-1985. She came from a broken home, a Muslim father and Hindu mother, who separated after having four children together. Reena is their third child, and she started films in her early teens. Her career in films started off inauspiciously with B.R. Ishara's "Nayi Duniya Naye Log" (1973) with another newcomer Danny Denzongpa, which was shelved temporarily. B.R. Ishara cast both actors again in "Zaroorat" (1972), along with another newcomer Vijay Arora, and the racy film became a hit. Reena was now called the "Zaroorat Girl." She had to wait a while for her next break with Jaise Ko Taisa (1973), where her rain-soaked dance to the song "Abke Sawan" with Jeetendra raised temperatures. She was a working actress with films like Jangal Mein Mangal, Rani Aur Lalpari, Madhosh, Goonj, and Umar Qaid, but most didn't make an impact, until the mid-1970s, when Zakhmee (1975) and "Kalicharan" (1976) made her more popular among directors and audiences. Initially, there was low expectations with Kalicharan, since Subhash Ghai, a failed actor, was making his directorial debut, and Shatrugan Sinha, an actor known for his villainous roles, was making his first mark as the lead hero. But the film defied everyone's expectations and became a surprise hit, and Reena as Shatrugan's love interest got attention from audiences. They became a off-screen pair as well, and they signed several films together. Her pairing with Sunil Dutt was also popular with audiences. The successes of "Zakhmee" and "Kalicharan" led to her star vehicle Nagin (1976). Playing the title role of the deadly 'Nagin', she avenges the death of her lover by ruthlessly murdering five leading male-stars. The film became a huge hit, and Reena received her first Filmfare nomination as Best Actress. She was now one of the top heroines in Hindi films. Raj Kumar Kohli worked with Reena and churned out greatest multi-starer blockbusters Nagin, Jaani Dushman (1979), Muqabla (1979) and Raaj Tilak (1984).Reena Roy-Shatrugan Sinha became a famous team after "Kalicharan," and had delivered 9 hits off the 16 they did together as the lead pair. But it was Reena's chemistry with Jeetendra in 17 marital dramas like Badaltey Rishtey (1978) and Pyaasa Sawan (1982) that set her career soaring. Jeetendra- Reena Roy had 12 box office hits off the 17 movies where they were paired romantically. The duo produced three of their greatest classics together - Apnapan (1977), Aasha (1980) and Arpan (1983). Reena's poignant dance in "Aasha" to the melody of "Shisha Ho Yah Dil" immortalized her as an icon of desire and tragedy. Her dark-shaded role in "Apnapan," as the selfish gold-digger that abandons her husband and child, won her the Best Supporting Actress Filmfare Award, beating out icons Nutan and Asha Parekh. (This was the precursor to the type of role that Meryl Streep played two years later in "Kramer vs. Kramer" (1979)). Reena rejected the Award on basis that she is the heroine of the film, not the supporting actress! And finally, her screen image as a sacrificing symbol of Indian womanhood is glorified in the immensely popular, "Arpan."After the box office success of "Aasha," for which she received her second Filmfare nomination as Best Actress, Reena Roy entered the 1980's as a leading lady in demand, securing herself critical roles with Superstar Rajesh Khanna in 4 films which became super-hits. She is the defiant widow who reforms the egotistical Rajesh Khanna of Dhanwan (1981); the beautiful 'actress' that dies on stage performing her last 'mujra' for Dharmendra in Naukar Biwi Ka (1983); and the talented psychiatrist determined to cure Vinod Khanna in the comical, Jail Yatra (1981). Top directors like Prakash Mehra, Raj Khosla and Sultan Ahmad grabbed her for crucial roles. Her off-screen relationship with Shatrugan ended by 1979.Her dream of working with Kaka and Shashi Kapoor got fulfilled in 80's.Reena Roy concentrated on her career, as she was providing Hema Malini stiff competition for the No. 1 position by the early 1980s such that Reena replaced Hema and Zeenat Aman as the highest paid actress from 1981-85 and was & 2nd highest paid Hindi actress from 1976-81. In 1982 alone, she had thirteen releases, by far more than any of her rivals. She was now demanding equal footing with Hema, and effectively stealing the show from Rekha in emotional melodramas like Prem Tapasya (1983) and Asha Jyoti (1984). Her characters became more versatile, as did her dances, as she effortlessly shifted from classical 'natyam' (Rocky (1981)) to "Disco Station" (Hathkadi (1982)). The sophisticated, glamorous model of Karishmaa (1984) was equally seductive as the village belle of Dharam Kanta (1982). Her profile was further enhanced with an extraordinary double role in the Muslim social, Ladies Tailor (1981), opposite Sanjeev Kumar.At the pinnacle of her popularity, Reena's dormant desire to prove herself found expression in a number of fem