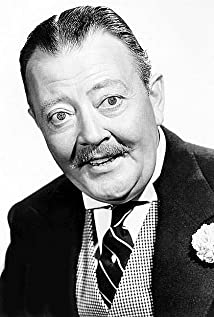 Stalwart character Raymond Walburn is one of those actors whose name may have slipped through the memory cracks over time, but whose valued contribution to 30s and 40s comedy films certainly warrants a reminder. Somewhat reminiscent of the "Mr. Monopoly" character, Walburn was the archetypal bombastic bumbler or supercilious stuffed shirt with the trademark bulgy eyes, snub nose, arched brows and trimmed mustache. He provided his patented brand of cheeky humor in nearly 100 "A" and "B" films during his career span. Walburn was born in Plymouth, Indiana on September 9, 1887, then moved to Oakland, California following high school with his actress mother. There he was placed in an acting school associated with the Liberty Theatre, the principal stock company in Oakland, and made his professional stage debut at age 18 playing the Second Witch in "MacBeth." Following extensive touring in stock shows, he took his first Broadway bow with the opening of "The Greyhound" in 1912.After a long period of struggle and a number of theater misfires, his career was interrupted by military service. This was shortly after his being cast as a replacement in the juvenile lead role in "Come Out of the Kitchen" starring Ruth Chatterton. Following his discharge from the artillery corps where he served in France, he resumed his Broadway and stock show career and grew in stature throughout the 1920s. In 1924 he made his London debut as Aubrey Piper in "The Show-Off," a role that keenly established his pompous image and brash, phony-baloney facade on stage and in later film. Over the decades Walburn's plus-sized comic vanity would become a repetitive scene-stealing tactic.Outside of a couple of nondescript roles in silent films, Walburn did not take a serious stab at films until 1929, when he was cast supporting a Ruth Chatterton vehicle (again), this time playing her unfaithful husband in The Laughing Lady (1929). He did not return to films again, however, until five years later following a stage success in "The Pursuit of Happiness" (1933). From 1934 on he continued to be seen in film and was a main character staple for Columbia. For Frank Capra his highlights included Colonel Pettigrew, the race track tout, in Broadway Bill (1934); Gary Cooper's ostentatious valet in Mr. Deeds Goes to Town (1936); and the opportunistic Judge Alexander in the Spencer Tracy/Katharine Hepburn starrer State of the Union (1948). He also performed in Capra's pallid musical remake of Broadway Bill entitled Riding High (1950) with Bing Crosby, in which he recreated his Colonel Pettigrew shyster. As a Preston Sturges favorite, Walburn shined as the sarcastic and pompous Dr. Maxford in Christmas in July (1940); the windbag Mayor Noble in the classic Hail the Conquering Hero (1944); and as the boss who fires Harold Lloyd in The Sin of Harold Diddlebock (1947) [aka Mad Wednesday].In post-war years, the by-now chunky-framed Walburn was given a great chance to show off by headlining his own "Henry" series of light comedy films. Playing patriarch Henry Latham in its debut Henry, the Rainmaker (1949), he was able to bounce off the droll antics of Walter Catlett's Mayor Colton character. Barbara Brown as his wife and young Gary Gray as son David were around for the entire series. He cavorted in five features ending with Father Takes the Air (1951). Walburn's last film was the rather uneventful western The Spoilers (1955). Following the death of his first wife Gertrude (affectionately known as Trudy), he more or less retired, but found happiness again when he married a family friend, Jane Davis.In 1962, at the age of 74, he came out of his self-imposed retirement at the urging of Harold Prince to join Zero Mostel and company in the burlesque musical farce "A Funny Thing Happened on the Way to the Forum" playing a senile Roman citizen. He played the show for 18 months, then went on to appear with Ruth Gordon in "A Very Rich Woman" in 1965. Walburn died in New York City at the age of 81 in 1969 following an extended illness.

She Couldn't Say No

State of the Union

The Sin of Harold Diddlebock