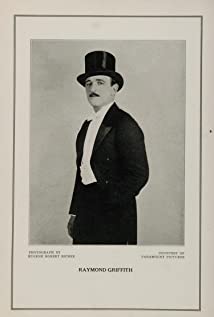 Raymond Griffith was born on January 23, 1895 in Boston, Massachusetts into a theatrical family. His parents, James Henry Griffith and Mary Guichard, were both actors, as were his grandfather, Gerald Griffith, and his great grandfather, Thomas Griffith. Young Raymond made his stage debut when he was 15 months old and by the age of seven played the eponymous lead in "Little Lord Fauntleroy." By the time he was eight, he was playing a female role in "Ten Nights in a Barroom."A childhood case of respiratory diphtheria permanently damaged his vocal chords, and when he was a young boy, Raymond lost his voice while playing a part in "The Witching Hour." "Photoplay" magazine's May 1925 issue reported that his voice went out while he was letting out a scream as his character was about to be beaten, as was required by the script."The audience heard a piercing shriek from the boy as he cringed before the whip. That was all. The terror on the boy's face was the terror of realism; he was stricken dumb. He could not speak a line after that scream. He has never spoken a line from the stage since then. His recovery was so gradual that he could not speak above a whisper for years, and he has never recovered the full carrying power, which the stage demands."The loss of voice was permanent. No longer able to act, Raymond joined a circus, then worked as a dancer and dance teacher at New York City's Grand Central Palace. He subsequently joined the vaudeville circuit, eventually undertaking a European tour with a company of French pantomimists.Eventually, he joined the U.S. Navy in 1910, when he was 15 years old, and served a two year hitch. Many sources claim his both year as 1890, which likely is the date he gave the Navy in order to enlist.It has been claimed that after his discharge, he went to California in 1914 where he was hired as an extra by Vitagraph while visiting a friend on a set. Another story has him arriving in California as part of a vaudeville tour and staying to appear in the movies, getting his first job with Kalem in 1915. What is known for sure is that he was working for the L-KO Motion Picture Kompany in 1915, and that he left the studio in early 1916 to work for Mack Sennett, probably primarily as a gag man and scenario writer, though he did perform in Sennett's comedy shorts.Except for a brief stay at Fox, Griffith worked for Sennett until moving to Triangle in 1917, where he worked as a movie comedian as well as a gagman and scenario writer. Drafted for service in World War I, Griffith was not inducted because of his vocal problems.Griffith returned to Sennett in 1918, and stayed with him for three years. Eventually, he did less acting and focused more on scenario writing. Leaving Sennett in June 1921 for Marshall Neilan, Griffith returned to acting. The association with Neilan lasted until the Fall of 1922, when he signed with Goldwyn Pictures.Griffith's first movie for his new studio was the mystery-melodrama "Red Lights" (1924). He appeared in Tod Browning's "The Day of Faith (1923)" with Eleanor Boardman and 'Tyrone Power, Sr.' and "The White Tiger" (1923) with Priscilla Dean and Wallace Beery for Goldwyn, though the latter film was ultimately released by Universal. After the Browning picture, Griffith made just one more movie for Goldwyn, "Nellie, the Beautiful Cloak Model" (1924) with Hobart Bosworth and Mae Busch before signing on with Famous Players-Lasky (Paramount).During his Goldwyn period, Griffith created an acting style uniquely his own that was a hybrid of the comedic and the dramatic. In his Goldwyn films he played detectives & journalists and characters not entirely on the side of the law. His characters were not explicitly comic, but the characterizations were infused with Griffith's panache, spiced with comic business that occasionally crossed the threshold into slapstick. The style often tipped the scenarios over into farce. It was this style that attracted the attention of Paramount.The first movie Griffith made at Paramount was Cecil B. DeMille's "Changing Husbands" (1924). His turn in "Paths to Paradise" (1925) won him the highest critical praise, and "Screenland" predicted that he would soon become Charles Chaplin's top rival. In 1926, he made the Civil War comedy "Hands Up!" (1926) that is widely considered his best comedy. Movie critic Walter Kerr wrote in his 1975 book "The Silent Clowns "'Hands Up!' contains some work that is daring ­for its period, certainly ­ and some that is masterfully delicate, the work of an inventive, unaggressive, amiably iconoclastic intelligence."He continued to do highly praised work in 1926, but his two films of 1927 failed to engender positive reviews. Griffith and Paramount subsequently terminated his contract "by mutual consent."On January 8, 1928, Raymond Griffith married the stage and film actress Bertha Mann, and they spent a six-month honeymoon in Europe. Griffith didn't appear in any movies in 1928, although he reportedly had several proj

The Man I Married

Drums Along the Mohawk

The Baroness and the Butler