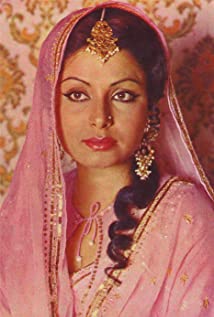 Rakhee was born in a Bengali-speaking family in West Bengal, on India's Independence Day - 15th August, 1947. She has no connections with anyone in the film industry in India.She achieved phenomenal success at her very first movie in Bengali 'Bandhu Baran' during the year 1967. She was then noticed by noted Bollywood actor, Sunil Dutt, who recommended her for a lead role in 'Reshma Aur Shera'. But before the release of this movie, Rakhee had already appeared in 'Jeevan Mritya' and 'Sharmeelee' opposite Dharmendra and Shashi Kapoor respectively.The on-screen pair of Rakhee Gulzar-Shashi Kapoor was very popular with audience and they did 9 films together. Four were critically acclaimed but box office flops and five were box office super-hits.She has acted in a total of approximately 91 movies, in a career that spanned from 1967 through to 2003. A total of four awards have been bestowed for her performances in 'Daag', 'Tapasya', 'Ram Lakhan', and 'Shubhu Muhurat'. She is perhaps the only actress who has acted both as a lead heroine and mother with Bollywood actor, Amitabh Bachchan.During her teen years, Rakhee was married to Ajoy Biswas, but the marriage was short-lived, and the couple divorced.Rakhee then got married to Music Director/Lyricist/Film Director, Sampoorna Singh Gulzar. They have a daughter named Megha alias Bosky. Rakhee quit acting in movies during the year 2003, and her last appearance was in 'Shubhu Muhurat'.

Ek Rishtaa: The Bond of Love