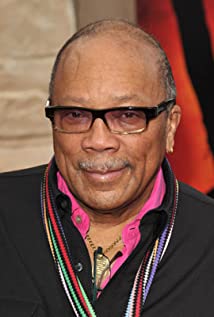 Considered to be one of the greatest minds in music and television history, Quincy Delight Jones, Jr. was born on March 14, 1933 in Chicago, Illinois. He is the son of Sarah Frances (Wells), a bank executive, and Quincy Delight Jones, Sr., a carpenter.Jones found his love for music while he was enrolled in grade school at Seattle's Garfield High School, this is also where he had met Ray Charles whom he later worked and became friends with. In 1951, Quincy Jones had won a scholarship to the Berklee College Of Music in Boston, Massachusetts. Jones however dropped out when he got the opportunity to tour with Lionel Hampton's band as a trumpeter and conductor. Jones also worked for the European production of Harold Arlen's blues opera, Free and Easy in 1959. After Jones had worked on several projects overseas he returned to New York where he composed and arranged, and recorded for artists such as Duke Ellington, Ray Charles, Sarah Vaughan, Count Basie, Dinah Washington, LeVern Baker, and Big Maybell. Jones was working with these artists while holding an executive position at Mercury Records, being one of the very few African Americans at the time to have such a position.In 1963, Quincy Jones won his first Grammy award for his Count Basie arrangement of "I Can't Stop Loving You". In 1964, by the request of director Sidney Lumet, Jones composed the music for his movie, The Pawnbroker. This would be the first of many Jones composed for film scores. By the mid-1960's Quincy Jones became the conductor and arranger for Frank Sinatra's orchestra. Jones also conducted and arranged one of Sinatra's most memorable songs, Fly Me To The Moon. Jones appeared on a lot of film credits for his music such as The Slender Thread, Walk, Don't Run, In Cold Blood, In The Heat Of The Night, A Dandy In Aspic, Mackenna's Gold, and The Italian Job. In 1972 Quincy Jones was the theme song composer for the hit-sitcom, Sanford And Son.Quincy Jones in 1978 worked on music for the Wiz, this is where he met icon, Michael Jackson. Jackson at the time was looking for a producer, Jones recommended some producers but in the end asked Jackson if he could do it, Jackson said yes. In 1982 as a result of this partnership, Jones had formed a tapestry with Jackson which was unbreakable it was called, Thriller. The Thriller album sold more than 100 million records world-wide. Jones continued working with Jackson with his Bad album in 1987. However after Jones recommended Jackson seek other producers to update his music. Jones referred Jackson to producer, Teddy Riley. This ended a partnership between two-greats, Jackson and Jones would never collaborate again.In 1981 Jones had an album called, The Dude. In 1985 Jones scored the film adaptation of The Color Purple. Jones also was a philanthropist, in 1985 gathering multiple stars to participate in the song We Are The World to help raise money to help the victims of the Ethopian disaster.In 1990 Jones composed a theme song for the new sitcom which was centered around Will Smith, The Fresh Prince Of Bel Air. Jones was also the executive producer of the show.Quincy Jones will forever be remembered as someone who helped sculpt music in every form, he refined music and through the music he helped sculpt brought messages of peace, justice, love, funk, and hope.

Miles Davis: Birth of the Cool

Count Basie: Through his own eyes

Rumble: The Indians Who Rocked The World