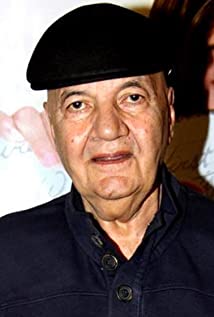 Prem Chopra is an actor in Hindi and Punjabi films. Prem Chopra was born to a Hindu Punjabi family in Lahore on 23 September 1935 to Ranbirlal and Rooprani Chopra. He was third of six children.His father worked at the attorney-general's office. He was brought up in Shimla. His father wanted him to be a IAS officer but Chopra pursued performing arts in College and graduated in arts from Punjab University. Shimla had a strong theater movement in the period 1957-1961 and Chopra reveled in it. He watched a lot of Hindi and English movies and, after graduation, came to Bombay in the early 1960's and joined the Times of India's circulation department due to his art's degree. Simultaneously, he kept visiting studios and tried to get a break in films.He kept trying to get a break in films. Prem Chopra made his debut in Bollywood with the Bharat Bhushan-starer Mud Mud Ke Na Dekh in 1960, which didn't do well. In 1960 he got a Punjabi film Chaudhary Karnail Singh opposite established star Jabeen Jalil and the film won a National Award and got Prem noticed.But he didn't have much hit Hindi films till 1964 with exception of his debut Punjabi hit films Karnail Singh and Sapni.Next in 1964 he played Sukhdev in Shaheed, one of his rare positive leading roles which became hit.His performances from 1965-67 in hit films like Sikandar E Azam ,Nishan,Kunwari,Teesri Manzil ,Mera Saaya and Upkar showcased his versatility. After Teesri Manzil and Upkaar he was flooded with films as a villain. Prem Chopra continued working with TOI, when already he was part of box-office hits like Nishan,Sikandar E Azam in 1965 and Sagaai, Mera Saaya in 1966. After Upkaar in 1967 he left The Times of India. As a villain, he gained fame all round India when he acted with Superstar Rajesh Khanna in Do Raaste. The duo of Rajesh-Prem worked in 19 films from 1969 till Ghar Parivaar in 1991.In the critically acclaimed comedy film Hulchul (1971), played the lead hero in this suspense thriller and was not a villain and Prem was leading man in Kunwari(1966), Samaj Ko Badal Dalo(1970). Prem Chopra played the main lead in 1970 box-office hit small budget comedy film Samaj Ko Badal Dalo as lead hero and was paired opposite Tamil actresses Kanchana and Shardha. The song sung by Rafi and pictured on Prem Chopra -Tum Apni Saheli Ko Itna Bata Do Ki Usse Koi Pyar Karne Laga Hai from this 1970 film continues to be popular. His peak period in Hindi films as a villain has been from 1967 to 1991. After 1999, he appeared as a villain in very few films. He took up positive character roles from 1999 and started getting more positive roles from 2005.His screen space got reduced in the films after 2005.Chopra regards his best roles and costumes were in Shaheed (1965), Sikander-e-Azam (1965), Kunwari (1966), Upkaar (1967),Do Raaste (1969), Purab Aur Pachhim(1970), Kati Patang (1970), Keemat(1973), Ajanabee(1974),Prem Nagar(1974), Kaala Sona (1975), Mehbooba(1976), Do Anjaane (1976),Jaadu Tona (1977), Tyaag (1977), Dostana (1980), Kranti (1981), Souten, Oonche Log (1985), Phool Bane Angaarey (1991), Bewaffa Se Waffa(1992). Prem played positive roles with large screen space in few films in 60's to 90's like in Shaheed, Kuwari, Samaj Ko Badal Dalo, Hulchul, Jadu Tona, Prem Pratigya.Later after 1999 Chori Chori Chupke Chupke and Koi Mil Gaya, Bunty aur Bubli, Virrudh, Maine Gandhi Ko Nahin Mara, Dhamaal, Rocket Singh, Delhi 6, Daddy Cool.had him in positive roles.He has ever since 1967 been a leading villain in Hindi films. The dialogs "My name is Prem, Prem Chopra" from the film Bobby and from the film Souten "Mai wo bala hu jo sheshay se pathar ko todtee hai" which closely translates to "I am that trouble which crushes stones with glass" are immensely popular.Prem Chopra married Uma, who is the younger sister of Krishna Kapoor, Prem- nath and Rajendranath in 1969 and they have three daughters: Rakita, Punita and Prerana.

Rocket Singh: Salesman of the Year