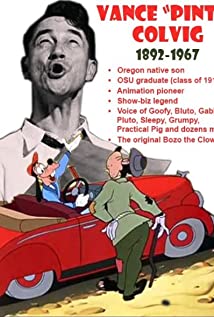 Pinto Colvig was the quintessential clown whose own identity was always hidden but whose innate warm-hearted character always came through his many talents. His humor tickled the funny bone and touched the heart. Incredibly gifted in music, art and mime, he spoke to different generations in different roles: as a child clown playing a squeaky clarinet, as a full-fledged circus clown under the big top, as a newspaper cartoonist, as a film animator, as a mimic and sound effects wizard, and as the voice of dozens of well-known characters on film, records, radio and television.Vance DeBar Colvig was born in Jacksonville, Oregon, on September 11, 1892. His school friends nicknamed him after a spotted horse named "Pinto" because of his freckled face - and just like his freckles, the name stuck for his entire life.Pinto's childhood home was filled with music and laughter, and he was a clown from birth. As the youngest of seven children, he would do anything to get attention. He learned to make people laugh by making faces and playing pranks. He also spent hours mimicking the sounds around him: a rusty gate, farm animals, sneezes, wind, cars, trains, etc. He and his brother Don put on song-and-dance minstrel shows at local functions. Along the way he picked up his instrument of choice, the clarinet, and soon played well enough to join the town band.It was the clarinet that got Pinto into show business when he was 12. Visiting Portland's "Lewis and Clark Centennial Exposition" with his father William, he was magnetized by "The Crazy House" on the Midway where a huckster attracted the crowd with a bass drum and shouts of "Hubba Hubba!" Pinto told the man he could play "squeaky" clarinet and ran back to the hotel to get his instrument. He was hired on the spot and given some oversized old clothes and a derby and, for the first time, white makeup and a clown face. The man told Pinto, "Now you look like a real bozo" ("bozo" was a name given to hobo or tramp clowns in those days). Pinto's act was to play a screechy clarinet while distorting his face and crossing his eyes at the high notes. He later recalled, "I never was able to get circuses and carnivals out of my blood after that."He went to school during the winter and worked in the circus and vaudeville in the spring. While studying art at Oregon Agricultural College (now Oregon State University) and playing with the college band, he became known for his clever cartoons in student publications, his funny "chalk talk" performances improvising a monologue while quickly sketching cartoons, and his unconventional lifestyle. He never took his class courses seriously and his college career ended abruptly in the spring of 1913 when he accepted an offer to do his chalk talks for the prestigious Pantages vaudeville circuit and wound up in Seattle, Washington. There he joined a circus band and traveled throughout the country struggling to make ends meet.In 1914 he landed a job as a newspaper cartoonist at the "Nevada Rockroller" in Reno, and later the "Carson City News" in Carson City. By the spring of 1915 his cartooning was going well but the lure of the circus was too strong. When the Al G. Barnes Circus came through Carson City, Pinto dropped everything and joined the troupe, once again clowning and playing his clarinet in the circus band.In those days circuses closed down each winter and Pinto returned to newspaper cartooning wherever he could find a job. While working on a Portland newspaper between seasons in 1916, he met and married Margaret Bourke Slavin, putting an end to his vagabond life as a circus performer. With a family to support, Pinto and Margaret moved to San Francisco, where he returned to the newspaper business writing and drawing cartoons full-time at "The Bulletin" and later the "San Francisco Chronicle". His cartoon series, "Life on the Radio Wave," which poked fun at the way the newly introduced radio was influencing people's lives, was syndicated nationally by United Features Syndicate. He greatly enjoyed cartooning and considered it another form of clowning. "A cartoonist," he said, "is just a clown with a pencil."While Pinto toiled daily to meet newspaper commitments, he began to spend evenings experimenting with the animation of cartoons and eventually set up his own studio, Pinto Cartoon Comedies Co., where he created one of the first animated silent films in color called "Pinto's Prizma Comedy Revue (1919)". In 1922, after realizing that San Francisco was not the place to break into the movie business, he moved his family to Hollywood. There he would be able to continue his animation work and find a wealth of other things that he could do. He was overjoyed one day to get an offer to join Mack Sennett, the reigning king of movie comedies, who had developed one of the most successful studios of the day, the Keystone Film Co., home of the famous Keystone Kops, Charles Chaplin and many others. Sennett needed an experienced animator for his own films,

Mickey's Magical Christmas: Snowed in at the House of Mouse

The Boys Next Door

The Legend of Sleepy Hollow