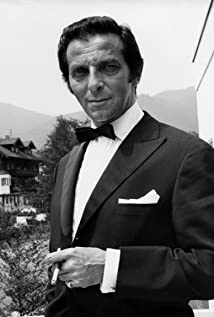 This lean, incisive, basso-voiced Swiss actor with the unsettling mephistophelean countenance was the son of a Galician-Jewish merchant. Pinkas Braun began his chosen vocation at the age of eighteen as an extra with the Zürcher Schauspielhaus (embracing what he considered the 'order and discipline' inherent in a theatrical career). A member of the company's ensemble from 1945 to 1956, Braun featured in numerous premieres of plays by Brecht (who played a pivotal role in his training as an actor), Camus, Dürrenmatt and Frisch. Braun's personal favorite and his critically most acclaimed performance was as Shylock in Shakespeare's "The Merchant of Venice". On the screen, his looks and voice naturally predetermined him for arch villainy. At the very least, he would be cast as sinister schemers, occasionally mitigated by a charming blend of rascality. Braun found his widest audience during the 1960's in several lurid adaptations of crime thrillers by Edgar Wallace which have since acquired a substantial cult following: Secret of the Red Orchid (1962) (as a wealthy orchid collector and blackmail victim); Front à la Scotland Yard (1962) (as the criminally insane Dr. Staletti); Der Fluch der gelben Schlange (1963) (Fing-Su, demonic leader of a murderous sect of Chinese snake-worshippers). At his scene-stealing best, Braun took full acting honours as the ruthless Percyval Glyde in a superbly-mounted TV mini-series, Die Frau in Weiß (1971), based on the classic novel by Wilkie Collins. As the owner of a distinctively sonorous voice he was guaranteed regular employment in radio drama or for synchronisation (notably, as William of Baskerville, chief protagonist of Umberto Eco's "The Name of the Rose"). Braun also established a reputation as a theatrical director of note and as the leading translator into German of the complete works of Edward Albee.