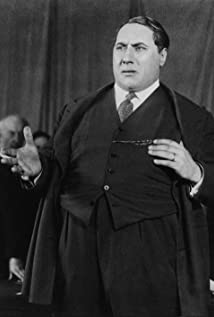 It was not obvious from the start that Pierre Alcover, a hefty John Blunt, would become a stage and movie actor. In fact he seems to be one of his kind for they are few those who made the transition from warehouseman at Les Halles (Paris' traditional central market) to winner of a first prize at the Conservatoire de Paris. But Alcover was both able to carry a 200 kilo load on his broad back as to tell the lines of famous playwrights on the boards of l'Odéon, the prestigious theater where he debuted in 1916. On the silver screen, his imposing stature and his gruff tone predisposed him to violent roles, on either side of the law. He was either a bandit (De koerier van Lyon (1937), Christine (1937) Louis Jouvet 's accomplices) or a cop (the inefficient policeman in Marcel Carné's comedy Drôle de drame (1937), also with Jouvet). A bad boy (in Fritz Lang's only French film Liliom (1934)), a head spy (in Jacques Robert's La chèvre aux pieds d'or (1925), En plongée (1926), a convict (with a heart) in the touching Little Lise (1930) directed by Jean Grémillon, he was the head warden in Criminel (1933), the French version of The Criminal Code (1930), the chief of the Czar's police in Pierre Billon's Au service du tsar (1936) and even Sanson the executioner in Sous la terreur (1936)! Anyway, whether a lawbreaker or a law enforcer, Pierre Alcover brought the same conviction (no pun intended) to the role he was given to play. One of the great character actors of the 1920s and 1930s.

The Citadel of Silence

The Swallow and the Titmouse