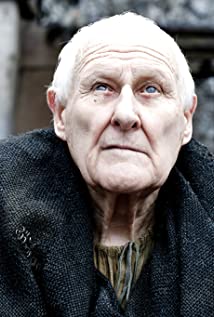 A true character actor in the best sense of the word, offbeat British thespian Peter Vaughan's hefty frame could appear intimidating or marshmallow benevolent; his beady, hollow eyes menacing or tender; his mere presence menacing or avuncular. Adept at playing both sides of the law, his characters usually possessed a strange, somewhat wary countenance that seemed to keep his audience slightly off balance. A homely sort with a bloated face, jutting chin, sliver lips and pronounced nose, this veteran has been a stalwart presence for nearly fifty years. Born Peter Ohm in 1923, he began on the stage and didn't enter films until 1959, well into his thirties.Married in 1952 to rising actress Billie Whitelaw, Peter was primarily in the background at first, offering a cheapjack gallery of thugs, unsmiling cops, and foreign agents in movies. An easily unsympathetic bloke, he played unbilled policemen in his first two films, then slowly gravitated up the credits list. He appeared as the chief of police in the spy drama The Devil's Agent (1962), which also featured his wife, and then gained a bit more attention in a prime part as an offbeat insurance investigator in the B movie Smokescreen (1964), a role that propelled him into the higher ranks. Noticeably shady roles came with playing Tallulah Bankhead's seedy handyman who meets a fatal end in the Gothic horror Die! Die! My Darling! (1965) [aka Die! Die! My Darling!]; his villainous roles in the spy thrillers The Naked Runner (1967) opposite Frank Sinatra and The Man Outside (1967); a German thug in A Twist of Sand (1968); and Sgt. Walker in The Bofors Gun (1968).Divorced from Whitelaw in 1966, he later married actress Lillias Walker, who had roles in a couple of his pictures: Malachi's Cove (1973) and Intimate Reflections (1975). TV became a large source of income for Vaughan in the 1970s, particularly in his role of Grouty in Porridge (1974) on both the large and small screen, and his quirky demeanor fitted like a glove for bizarre director Terry Gilliam, who cast him as the Ogre in Time Bandits (1981) and then as Mr. Helpman in Brazil (1985). For the past few decades he has maintained a healthy balance between film (including standout roles in Zulu Dawn (1979), The Remains of the Day (1993) and The Life and Death of Peter Sellers (2004)) and TV mini-movies, both contemporary and period. He was still performing into his 90s: his final role was Maester Aemon Targaryen in HBO's Game of Thrones (2011).He died at age 93 on December 6, 2016, in Sussex, England.

Christmas at the Riviera

Death at a Funeral

The Life and Death of Peter Sellers