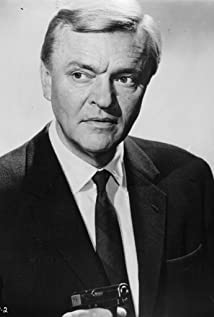 With his whitish blond crew-cut, slow, menacing drawl and Germanic manner, Van Eyck was destined to be typecast as stereotypically scowling, arrogant Nazi officers. This was ironic, because being an avowed anti-fascist, he had left Germany in 1931 -- two years before Adolf Hitler came to power. The son of an aristocratic Prussian land owner, his father had intended him to embark on a military career. Instead, Peter spent his education in Berlin, where he trained as a musician.In 1937, Van Eyck arrived in New York via Havana, Cuba, and became acquainted with the composer Aaron Copland. This led to a collaboration, as well as solo efforts, as composer and lyricist on a variety of songs for revue and cabaret. He also moonlighted as a pianist in bars and nightclubs. Around this time, he also began to work as a stage manager and arranger for Irving Berlin. Not afraid to try any job that came along, he tried his hand at driving a truck, and this, somehow, led him to Hollywood where he became a protege of the director Billy Wilder. Wilder prompted him to appear in front of the cameras. In 1943, Peter began a career in films, by this time as a naturalized American citizen. For the remainder of the decade, he had little to do but re-enact basically the same part of German officers and Gestapo henchmen in films like Five Graves to Cairo (1943) and Address Unknown (1944).After the war, Van Eyck returned to Germany, where he was ironically cast as an American officer in Hallo, Fräulein! (1949). He also appeared in the comedy Royal Children (1950) ,with Jenny Jugo), as yet another American. One of his best ever performances as an actor was in the role of Bimba, in Henri-Georges Clouzot's high octane thriller The Wages of Fear (1953). Van Eyck played one of a group of daredevil truck drivers traversing an impenetrable South American jungle with a deadly load of nitroglycerin. There were other good roles: as the womanising Frenchman Fribert in Rosemary (1958); a police inspector investigating a famous murder in Doctor Crippen lives (1958),aka 'Dr.Crippen lives'); a starring role as Paul Decker, who attempts the perfect murder of his wife in The Snorkel (1958); and one of two industrialist brothers in 'Helmut Kautner''s The Rest Is Silence (1959).In the 1960's, Peter Van Eyck appeared increasingly in unmemorable international co-productions. Having settled in Switzerland and maintaining a residence in Paris, he was ideally placed to alternate between French, English and German film roles. He was seen in three potboilers about the master criminal Dr.Mabuse, which were extremely popular in Germany. His best roles during this period were as the East German intelligence officer Mundt, who is the target of The Spy Who Came in from the Cold (1965); and as Colonel General von Brock in the absorbing war drama The Bridge at Remagen (1969), which was also his last film. Van Eyck died near Zuerich in Juli 1969 of septicemia, just short of his 58th birthday.

The Bridge at Remagen

The Spy Who Came in from the Cold

The Death Ray of Dr. Mabuse

Seduction by the Sea