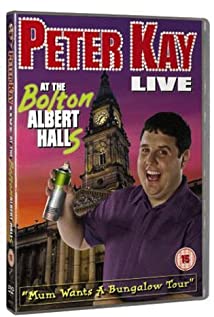 He was taught metal work at school by the actor Steve Coogan's dad, and like Coogan he was an altar boy. He proposed to his wife Susan on one knee outside 'Andy's Records', because it was the first place where they kissed. He's worked everywhere, in a factory packing toilet rolls, in a supermarket, in a video shop, at a bingo hall, at a cash and carry, as a mobile disc jockey and at a garage for six years in between all the other jobs. He claims he lied to get into college, he told them he'd two 'A' Levels and five GCSEs and apparently they never checked up.He won the 1997 So You Think You're Funny contest at Edinburgh and the North West Comedian of the Year award. In 1998 Peter took his own hour-long show to the Edinburgh Fringe and was nominated for the Perrier Award. Peter actually has a qualification in stand up, which he got as part of his Btec in Media Performance Studies. His childhood ambition was to be a bin man.

The Curse of the Were-Rabbit

The League of Gentlemen's Apocalypse