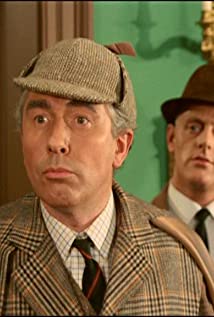 Actor, playwright and game show panellist, the son of an antiques dealer. Jones was educated at Ellesmere College where he first performed in school plays. At age sixteen he made an unsuccessful stab at acting on the professional stage at the Wolverhampton Grand but was fired after just one performance. Putting in the hard yards to improve on his acting skills he subsequently worked for BBC radio and then in regional repertory theatre, prior to making his debut at London's West End Haymarket Theatre in a 1942 production of George Bernard Shaws 'The Doctor's Dilemma'. During the 1950's and 60's, Jones also contributed scripts for BBC radio, as well as writing and directing plays, though none of the latter met with more than moderate success. There were also a handful of film appearances, invariably in small parts. A tendency for understating his performances possibly limited his chances for a more substantial career in this medium. Just prior to playing a barman in Dead of Night (1945), Jones suffered a bout of pneumonia and was told by a doctor at Brompton hospital, that he'd have to give up acting altogether. Luckily, he ignored that advice...His breakthrough finally arrived in the shape of a highbrow radio comedy -- "In All Directions" -- which he co-wrote and acted in alongside Peter Ustinov. This witty, much improvised program (1952-55) foreshadowed the future Jones screen personae and, over the years, acquired a cult status akin to 'The Goon Show'. His penchant for unhesitating delivery and cultivated banter also made him a popular long-running contestant on the BBC game show "Just a Minute". His fame on radio effectively flowed on to television, where, from the 1960's, he appeared in a variety of droll, frustrated or mildly befuddled roles.Jones's characters were often avuncular or affable. This applied even to his would-be criminal mastermind Eddie of BBC 1's sitcom Mr. Big (1974), in which he co-starred with Prunella Scales. One of his most memorable parts was that of clothing manufacturer Harold Fenner, perpetually pinned on the defensive by his combative shop steward Miriam Karlin in The Rag Trade (1961). He appeared to good effect in several other comedy series, which have fared rather less well in re-runs, but are little gems, nonetheless: as junior executive Gerald Garvey, earning rather less (much to his chagrin) than working class neighbour Harry Butt (Reg Varney) in a comedy of class distinction and jealousy, Beggar My Neighbour (1966); as pompous Gatling-Fenn in a very British comedy of manners, doing One-Upmanship (1974) with Richard Briers; and as Kevin Pork, the fruity ultra-left British Prime Minister of Whoops Apocalypse (1982) who thinks he is Superman. Back on the 'cult' side of things, Peter Jones was the smooth, matter-of-fact voice of 'The Book' in both radio and TV versions of The Hitchhiker's Guide to the Galaxy (1981). The resulting popularity of the show led to further voice-over and radio work, notably a series of comic monologues 'by an ex-theatrical thespian', detailed in 'J. Kingston Platt's Showbiz Handbook'.During the 1990's, Jones made only sporadic TV appearances, often in non-comedic parts. His last recurring character was that of Inspector Bradley in a little-seen, idiosyncratic crime series called The Mixer (1992), set in 1930's London. A truly genuine original in British TV comedy, Peter Jones died in Westminster, London, in April 2000 at the age of 79.

Mad and Bad: 60 Years of Science on TV

The Making of 'The Hitch-Hiker's Guide to the Galaxy'

The Hitch Hikers Guide to the Galaxy