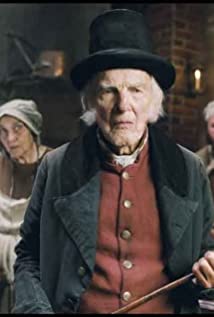 Peter Copley (20 May 1915 - 7 October 2008) was a British television, film and stage actor.Copley was born in Bushey, Hertfordshire, son of the master printers, John Copley and Ethel Gabain. He studied acting at the Old Vic school under Harcourt Williams and Murray Macdonald. He made his stage debut as the jailer in the Old Vic production of The Winter's Tale in 1932, and his West End debut three years later. His wartime naval service (1940-41) was sandwiched between a wide range of theatrical work, including a tour of south America with Edward Stirling (1936), a season at the Gate, Dublin (1939), wartime touring and a spell as director of the Worthing rep (1945). From 1945 to 1950, he was at the center of Olivier's Old Vic Company at the New Theatre, St Martin's Lane. He would talk about performing in Hamburg immediately after the war - seeing SS men sitting, broken, on the pavement, and finding a copy of Mein Kampf alongside the Bible in a dressing room.Review after review singled Peter out - as a great swordsman in Cyrano de Bergerac (1945) opposite Ralph Richardson, or as the comic Ananias in the Old Vic's The Alchemist (1947), years later at the Duke of York Theatre in Tom Stoppard's Artist Descending a Staircase (1980), or for his Teiresias in Katie Mitchell's Royal Shakespeare Company production of The Phoenician Women (1995). He loved working at the RSC, in productions including The Cherry Orchard (1997) and Henry IV part II (2000).He appeared on television hundreds of times, in everything from The Forsyte Saga (1967) to The Avengers (1961), The Bill (1984), and One Foot in the Grave (1990). His last appearance was as Greyhald Spold in Terry Pratchett's The Color of Magic (2008) in 2008.He was in many movies, including a role as the Jeweller alongside The Beatles in Help! (1965), and worked with some of the great directors. In 2005, he was in Roman Polanski's Oliver Twist (2005) and returned from Poland (where it was shot) with stories of how the director coaxed and bullied the child performers. He was impressed, a little shocked, but was, at 90, thrilled that, watching the children and director work, he still felt he was learning about acting. This, from a man who had worked with Steven Spielberg on Empire of the Sun (1987) and appeared in epoch-defining films such as Basil Dearden's Victim (1961).It was this openness that made Peter a special actor. He was delicate, subtle and always stimulated. Not necessarily powerful or bombastic, he knew how to listen and to react, holding the audience - in any medium - by drawing them in rather than hitting them hard. He was never tedious about acting. Highly intelligent, well read and knowledgeable, he believed that his craft came first from instinct and observation, and that intellect could get in the way.Peter had been a Communist party member in the 1940s and early 50s, and while he renounced the Soviet model, he remained a committed socialist. He trained as a lawyer and was called to the Middle Temple bar in 1963, though he never practiced. He was actively involved in the actors' union Equity and, until recently, was a venerable part of the campaign to reopen the Bristol Old Vic. Between 1980 and 1995, he appeared in 25 theater productions including a heartbreaking John of Gaunt in Richard II (1985) and the ghost and player king in Hamlet (1991).Copley's TV credits included Thorndyke (1964), A Dangerous Man: Lawrence After Arabia (1992), The Saint (1962), The Avengers (1961) and The New Avengers (1976), The Forsyte Saga (1967), Mogul (1965) (originally, The Troubleshooters), The Champions (1968), Department S (1969), Doomwatch (1970), Z Cars (1962), Fall of Eagles (1974), Survivors (1975), Father Brown (1974), Doctor Who (1963), Sutherland's Law (1973), Tales of the Unexpected (1979), Miss Marple: Nemesis (1987), Lovejoy (1986), The Bill (1984), Mystery!: Cadfael (1994), and One Foot in the Grave (1990).Margaret Tabor was Peter's third wife, and they had a remarkable partnership. They had moved to Bristol in 1981. Copley died in 2008 at the age of 93. He was survived by his third wife, his daughter Fanny, and stepchildren Gid and Emma.

The Colour of Magic

Far from the Madding Crowd

All or Nothing at All

A Dangerous Man: Lawrence After Arabia

Empire of the Sun