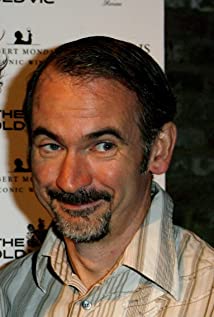 Versatile character actor Paul Ritter was born in Kent on March 5th 1966 and, whilst not from a show business family, there are strong thespian connections as his mother was a class-mate of comic actor Bernard Cribbins and his father attended the same school as the great comedian and writer Eric Sykes - whom Paul would portray in the TV drama 'Tommy Cooper: Not Like That, Like This.' In the last decade of the twentieth century and beginning of the 2000s he built up an enviable roster of stage roles, working with the National Theatre in 'The Royal Hunt of the Sun', 'All My Sons', 'Coram Boy', 'The Hot-House', 'The Curious Incident of the Dog in the Night- time' and more recently as John Major in 'The Audience'. For the Royal Shakespeare company he has taken part in a host of classical plays including 'Troilus and Cressida' and 'The White Devil' and in 2009, along with co-stars Amanda Root, Jessica Hynes and Stephen Mangan was nominated for a Tony award when the Old Vic's revival of 'The Norman Conquests' played on Broadway. In the second decade of the twenty-first century he has become one of television's most welcomely ubiquitous actors in such varied parts as a Scots vicar in 'Mapp and Lucia', a mother-dominated gay spy in 'The Game', in police dramas 'Vera' and 'No Offence' and as Pistol in the BBC's adaptation of 'Henry IV', for which performance the Telegraph newspaper described him as 'an actor destined for greatness soon'. However he is arguably best known for playing eccentric, usually shirtless Martin Goodman hosting his 'bambinos' for their 'Friday Night Dinner' in the Channel 4 sitcom of that name.