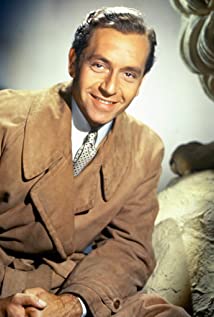 Paul Henreid was born Paul Georg Julius Freiherr von Hernreid Ritter von Wasel-Waldingau in Trieste, in the Austro-Hungarian Empire. He was the son of Marie Luise Heilig (Lendecke) and Baron Karl Alphons Hernreid. His father was an aristocratic banker, who was born to a Jewish family whose surname was changed from Hirsch to Hernreid.Paul grew up in Vienna and studied at the prestigious Maria Theresa Academy (graduating in 1927) and the Institute of Graphic Arts. For four years, he worked as translator and book designer for a publishing outfit run by Otto Preminger, while training to be an actor at night. Preminger was also a protégé (and managing director) of Max Reinhardt. After attending one of Henreid's acting school performances, Preminger introduced him to the famous stage director and this led to a contract. In 1933, Paul made his debut at the Reinhardt Theatre in "Faust". He subsequently had several leading roles on the stage and appeared in a couple of Austrian films. Paul, like his character Victor Laszlo in Casablanca (1942), was avidly anti-fascist. He accordingly left continental Europe and went to London in 1935, first appearing on stage as Prince Albert in "Victoria the Great" two years later.Henreid made his English-speaking motion picture debut in the popular drama Goodbye, Mr. Chips (1939), as the sympathetic German master Max Staefel, who proves to be Chipping's truest friend and ally. After that, however, he became incongruously typecast as Nazi henchmen in Mad Men of Europe (1940) and Night Train to Munich (1940). That year, he moved to the United States (becoming a citizen the following year) and quickly established himself on Broadway with "Flight to the West", as a Ribbentrop-type Nazi consul. His powerful performance led to radio work in the serial "Joyce Jordan-Girl Interne" and a film contract with RKO in 1941.This marked a turning point in Paul Henreid's career. He finally escaped the stereotypical Teutonic image and began to play heroic or romantic leads, his first being Joan of Paris (1942), opposite Michèle Morgan, as French RAF pilot Paul Lavallier. Significantly, his next film, Now, Voyager (1942), defined his new screen persona: debonnaire, cultured and genteel, lighting two cigarettes simultaneously, then passing one to Bette Davis. According to Henreid, this legendary (and later often lampooned) scene was almost cut from the film because the director, Irving Rapper, had concerns about it. Next came "Casablanca", where Henreid played the idealistic, sensitive patriot Victor Laszlo; the poorly received Bronte sisters biopic Devotion (1946), as an Irish priest; and a stalwart performance as a Polish count and Ida Lupino's love interest, In Our Time (1944).After several dull romantic leads, Henreid reinvented himself yet again. He played a memorably athletic and lively Dutch pirate, the 'Barracuda', in RKO's colourful swashbuckler The Spanish Main (1945). Another of his best later performances was as a sadistic South African commandant in the underrated film noir Rope of Sand (1949), which re-united him with his former "Casablanca" co-stars Peter Lorre and Claude Rains. After the Arabian Technicolor adventure, Thief of Damascus (1952), Henreid's star began to fade. His last noteworthy appearance during the fifties was as an itinerant magician in the oriental extravaganza Siren of Bagdad (1953) . The most memorable of several in-jokes, had Henreid lighting two hookahs (water pipes) for one of his harem girls, spoofing his famous scene from "Now, Voyager".Outspoken in his opposition to McCarthyism and adhering to his rights under the First Amendment, he was subsequently blacklisted as a "communist sympathizer" by the House Committee on Un- American Activities. In spite of the damage this did to his career, he re-emerged as a director of second features and television episodes for Screen Gems, Desilu and other companies. In 1957, Alfred Hitchcock (in defiance of the blacklist) hired him to direct several episodes of Alfred Hitchcock Presents (1955). Towards the end of his career, Paul Henreid directed his former "Now, Voyager" co-star Bette Davis in the camp melodrama Dead Ringer (1964) and toured with Agnes Moorehead on stage in a short-lived revival of "Don Juan in Hell"(1972- 73). Henreid died of pneumonia in a Santa Monica hospital in April 1992, after having suffered a stroke. He has the distinction of having not just one but two stars on the Hollywood Walk of Fame, one for his films, and one for his television work.

The Four Horsemen of the Apocalypse