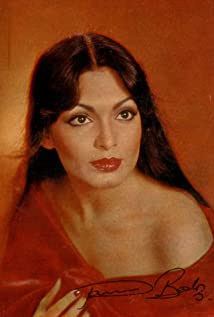 born and raised in Junagad, Ms. Babi was spotted by renowned B.R. Ishara at Ahmedabad University, and he approached her to act in his forthcoming movie, Charitraheen, which was a sequel to Chetna. Her co-star in this movie was none other than renowned Indian cricketer Salim Durrani. Parveen Babi lit up the silver screen with her charming looks and personality from the 1970s.Among her more memorable movies with megastar Amitabh Bachchan are: Deewar, Namak Halal, Amar Akbar Anthony, and Kala Pathar. Her most glorious moment was when Time Magazine chose to display her photograph on their cover page in 1976, depicting the changing face of Bollywood and Bollywood actresses.After acting in her last movie, Akarshan, she suddenly disappeared from public view and became more or less a recluse. It is known that she took up interior designing, and had a very close circle of friends.She then left for the United States of America and was not seen nor heard for about 10 years.She created a stir when she filed a writ petition in the Bombay High Court, charging several dignitaries, including Bollywood actor, Amitabh Bachchan, for attempting to kill her. This petition was dismissed by the Court for want of evidence.On Sunday January 22, 2005, neighbors at her Juhu residence noticed that she not collected her milk nor her newspapers from her doorstep for the last three days. The neighbors notified the Secretary of the building, who in turn notified the police.On Saturday January 22, 2005, a police team opened the door to her apartment with a duplicate key, and found her dead body.The police believe that the door had been locked from the inside for last three days, and suspect no foul play.Ms. Babi was an only child in a noble Junagad-based family. Her dad had passed away when she was very young, and her mom also passed away several years ago.

Do Aur Do Paanch