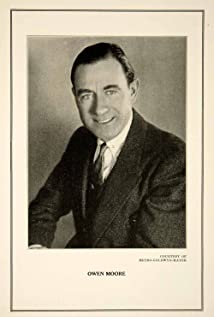 Born in 1884, virile and dashing silent screen idol Owen Moore, equipped with incredibly handsome reddish and ruddy features, came to America with his family from Ireland at the age of 11. After some stage work, he entered films at the Biograph Studio in 1908 and appeared in many of D.W. Griffith's early productions.Owen was Mary Pickford's stylish leading man in her early career-starters and they secretly married in 1911. Some of their classic pictures together include Cinderella (1914), in which he played her Prince Charming, and Mistress Nell (1915). Mary left Owen for Douglas Fairbanks, however, and the couple eventually divorced in 1920. A couple of years later Owen met and wed silent film actress Kathleen Perry, a marriage that lasted until his sudden death of a heart attack at age 54. This couple also made several pictures together.A talented singer in his own right, Owen's timing was off for he was much too old to see what kind of impression he could have made in musicals come the advent of sound. A popular romantic leading man during his heyday, his career took a nosedive once talkies arrived. His last film would be Janet Gaynor's A Star Is Born (1937), in which he played a movie director.Owen's brothers Tom Moore and Matt Moore were also popular leading men at around the same time, but Owen was probably the best known due to his association with Pickford. The three of them appeared together in only one feature film, Side Street (1929). His mother Mary Moore was a character actress for a time, featured in Clara Kimball Young's film Lola (1914). She eventually quit the business, returned to the British Isles and became Lady Wyndham, and died there in 1931. Two other siblings were also briefly actors, Mary Moore and Joe Moore (aka Joseph Moore), but they died young and remain much lesser known. Owen died fairly young himself at age 54 of a heart attack in 1939.

She Done Him Wrong

Intolerance: Love's Struggle Throughout the Ages

In the Border States

A Corner in Wheat