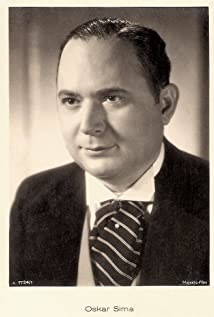 This corpulent, balding character actor was a ubiquitous presence in German-speaking films for almost half a century. So much so, that a contemporary critic referred to him as 'the king of the supporting roles'. A baker's son, Sima had at first aspired to become a writer. When this somehow failed to materialise, he went on to study drama at Vienna Conservatory. His first theatrical engagement in 1919 took him to the Deutsche Theater in Prague. Afterwards, he was to divide his time on stage between Vienna and Berlin. From 1927, Sima came under the auspices of Max Reinhardt, who was astute enough to recognise his singular comic talent and had him cast in satirical or comedic roles.Sima's screen career commenced in 1921. He made limited headway until the arrival of sound. All of a sudden, he started to average several films per year, often acting in commercially successful pictures like Die Fledermaus (1931), Such a Boor (1934), Liefde, dood en Duivel (1934), Glückskinder (1936), Gasparone (1937), Frau im Strom (1939) and Jenny als detective (1941). His stock-in-trade character was the surly curmudgeon: sometimes villainous, cigar-chewing and choleric, sometimes shifty and scheming, all the while deceptively amiable. At other times, he provided effective, often scene-stealing comedy relief, as pompous, easily deflatable editors, industrialists or burgomasters. Sima continued, unabated, during the post-war era, alternating comedies with romantic melodramas. In 1967, he was forced into retirement following a heart attack, retreating to his horse-breeding stud near Vienna.During the national socialist era, Sima's stance towards the ruling regime seemed ambivalent. On the one hand, he vociferously applauded Austria's 'Anschluss' with Germany. He went as far as to join the NSDAP, ostensibly, in order to continue performing. On the other hand, Sima appears also to have been associated with at least one resistance cell during the 1940's. Perhaps, that curious ambiguity accounted for his receiving the one major award of his prolific career, the Filmband in Gold, only just prior to his death in June 1969.

Love Must Be Understood