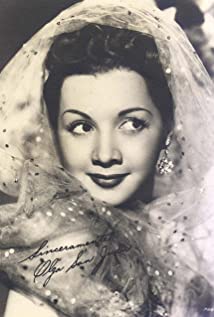 She possessed the same tiny frame and fervid temperament as Brazilian Carmen Miranda and, for most her career, Puerto Rican singer/dancer Olga San Juan, like Miranda, was a welcome distraction by American audiences. A flavorful, scene-stealing personality who delightfully mangled the English language, she decorated a number of war-era and post-war musicals and comedy escapism with her special brand of comedy.Dubbed the "Puerto Rican Pepperpot" during her heyday, Olga was born in the Flatbush section of Brooklyn. Her family returned to Puerto Rico when she was three, but came back to America after a few years and, this time, settled in "Spanish Harlem". By age 3, she was taking dancing lessons and was almost immediately thrust into the limelight by her mother. By age 11, she (and five other young girls) had executed the Fandango for Franklin D. Roosevelt at the White House. As a teenager, Olga performed at such hot spots as the El Morocco and the Copacabana and, subsequently, earned pay as a dancer with famed jazz and mambo musician, Tito Puente, who by then had earned the title of "The King of Latin Music".Gaining momentum appearing on radio, Olga formed a popular night club act, Olga San Juan and Her Rumba Band, that eventually caught the eye of Paramount Studios. Putting her under contract, Olga, as an added incentive to stand out, decided to become the first dyed-blonde Latin movie spitfire. Making her film debut in the tropical musical short, Caribbean Romance (1943), her second short film, Bombalera (1945), earned itself an Academy Award nomination. In this, Olga was billed, appropriately enough, as "The Cuban Cyclone". She was front and center in her third short, The Little Witch (1945), a musical romance in which she virtually played herself as a night club singer.Her feature film debut came in the form of Rainbow Island (1944), a typical South Seas vehicle for sarong-wearing Dorothy Lamour. Soon, Olga was seen playing "other woman" supports. Arguably, her finest hour came alongside Bing Crosby and Fred Astaire in her first post-war picture, Blue Skies (1946), adding zest to such songs as "You'd Be Surprised", "Heat Wave" and "I'll See You in C-U-B-A". While the boys are vying for the romantic attentions of gorgeous Joan Caulfield, Olga is paired up, engagingly, with another comedy scene-stealer, Billy De Wolfe.Constricted in films by her heavy accent, Olga nevertheless became an ethnic commodity for Paramount and, for the rest of the post-war decade, was enjoyably featured in light "B" material. She stood out playing Mary Hatcher's comedy sidekick and fellow wannabe movie star in Variety Girl (1947), which seemed more of an excuse to feature Paramount's huge roster of superstars in cameo bits; was borrowed by Universal to juice up the musical proceedings, opposite geeky Donald O'Connor, in the comedy, Are You with It? (1948); played a mortal second fiddle to goddess Ava Gardner in One Touch of Venus (1948); offered silly distraction in skating star Sonja Henie's final Hollywood ice extravaganza -- The Countess of Monte Cristo (1948); and lent funny, flashy vulgarity to one of Preston Sturges' lesser outings, The Beautiful Blonde from Bashful Bend (1949), a Betty Grable vehicle for Twentieth Century-Fox.During this period (1948), Olga had met and married actor Edmond O'Brien. The couple had three children, two girls and a boy. Her last hurrah in the industry came, by accident, when famed lyricist Alan Jay Lerner happened to hear her sing at a festive Hollywood gathering and offered her one of the leads (Jennifer Rumson) in his Broadway-bound musical, "Paint Your Wagon", in 1951. The show was a flop, running just eight months, and Olga left the cast before the run ended, after becoming pregnant with her second child. In the aftermath, Olga, a strict Roman Catholic, decided to concentrate on marriage and family. Aside from a smattering of TV shows, she completely retired. On film, she was briefly glimpsed only two times more, both of them being her husband's vehicles, The Barefoot Contessa (1954), in which he won the "supporting actor" Oscar, and The 3rd Voice (1960).Settling in West Los Angeles, Olga suffered a stroke in the 1970s and slowly declined in health, from that point on. Divorced from O'Brien in 1976, their children all involved themselves in different facets of the business. Daughter Maria O'Brien became an actress in her own right and son Brendan O'Brien also delved into acting as well as writing and guitar-playing. Other daughter, Bridget O'Brien Adelman, became a TV producer. After decades of being out of the news, it was reported in January of 2009 that Olga had died at a Burbank hospital of kidney failure, following an extended illness. She was 81.

One Touch of Venus

Out of This World