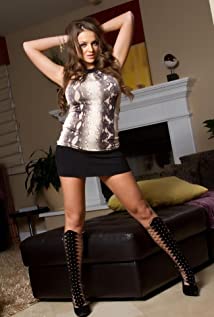 With a seductive, silk-toned voice, alluring eyes and pleasingly full lips, brunette Nika Noire has made an impressive showing in her promising adult-film career. This piercing, blue-eyed beauty from the Ukraine was born on December 8, 1984. She began her adult-film career at age 23 in 2007, and the work she has done only attests that her longevity in the business is doubtlessly guaranteed. Since her entry into the adult-film business Nika has appeared in over 120 films and worked for numerous companies. The tall (5'10") beauty comes across as quite warm-natured and inviting on camera, often appearing submissive and eager to please her partner or partners. A versatile performer, she can play everything from sexually inquisitive teenagers to a naughty sharing an unsuspecting teenage girl with her "husband", as shown in 2008's "Couples Seduce Teens #9".Nika has proved to be a favorite with both fans and those in the adult-film community itself. Her career continues to prosper and flourish with each year she appears in front of cameras, giving 100% of herself to her fans in consistently satisfying performances.