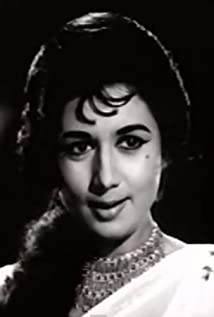 A film career spanning from the 1940s to the 1980s, Nanda was born on January 8, 1941, to a show-business Marathi family in Bombay, India. Her father was actor Master Vinayak, and her mother was Sushila. Nanda was the third of seven brothers and sisters. When she was just 5 years old, her father wanted to cast her in his film "Mandir" (1948). She didn't want to do it, but her mother cajoled her into it. She played a boy in the film, a role that could have been easily played by her brothers. But Nanda always believed that the reason her parents cast her in the film was because she was their favorite child. It was during the filming of "Mandir" that her father suddenly died. The film was eventually completed by Dinkar Patil. Nanda went onto become a child star, where she was credited as Baby Nanda, in films like "Jaggu" (1952). Her income supported her large family.When Nanda was a teenager, Shantaram Rajaram Vankudre asked her to attend a wedding in a sari. When he saw her, he felt she was ready to graduate from child roles to sister roles. He cast her in "Toofan Aur Diya" (1956), and she was no longer called Baby Nanda but just Nanda. The film's success led to more sister roles, gaining recognition with the release of "Bhabhi" (1957) for which she received her first Filmfare nomination as Best Supporting Actress. Nanda played the title role in "Chhoti Bahen" (1959), and it became a major hit. She was declared a star and earned a reputation as a talented actress who can do tragedienne roles. She won the Filmfare Best Supporting Actress award for "Aanchal" (1960), a major accomplishment, considering that she was still a teenager. She impressed Dev Anand when she played his sister in "Kala Bazaar" and also his heroine Waheeda Rehman who became her close friend for the next 55 years. Anand promised her that he would graduate her to be his heroine in his next film "Hum Dono" (1961), and when the film became a hit, she was offered more heroine roles. She was considered a generous and kindhearted actress, agreeing to act with an then-unknown Shashi Kapoor in "Char Diwari" (1961). Even though, the film flopped, she signed onto do seven more films, for which Kapoor always remained grateful to her, calling her his favorite leading lady. Their biggest hit was "Jab Jab Phool Khile" (1965), where Nanda played a glamorous, Westernized woman in love with a native Kashmiri played by Kapoor. The film totally changed her career from a tragedienne to a trendy fashionable star. She also had another big hit that same year, the murder mystery "Gumnaam" (1965), which put her in the top league of heroines. She continued in heroine roles for the next nine years, again drastically changing her image from a good girl to an adulteress/murderess in "Ittefaq" (1969), which earned her a Filmfare nomination as Best Actress. She started winding down her career in the 1970's, with her memorable cameo in "Shor" (1972). She ended her career as a heroine with "Naya Nasha" (1974), playing a drug addict, a daring role that other actresses would have been afraid to play. Then, she vanished from the screen for several years and reappeared in 3 movies in 1982: 'Mazdoor', 'Ahista Ahista', and 'Prem Rog', the latter two earned her back-to-back Filmfare Nominations as Best Supporting Actress. In all 3 movies she coincidentally played the mother of actress Padmini Kolhapure. Then, she permanently retired from films.Very shy and introvert, Nanda kept to herself, staying close to family and friends. A middle-aged Nanda finally agreed to marry film-maker Manmohan Desai, an engagement took place in 1992, but before the wedding could take place, Manmohan died when he fell from a building. That death, along with her mother and brother's deaths, made her shun the spotlight even more.She did stay in touch with her friends, Waheeda Rehman, Sadhana, Asha Parekh, Shammi, Helen, and Saira Banu almost to her dying day. She died of a sudden heart attack on March 25, 2014. The film industry had a public funeral, grieving the loss of their beloved star, an award-winning actress who was respected for her talent, versatility, and longevity of her career. Her family and friends grieved that they lost a sweet, wonderful woman.