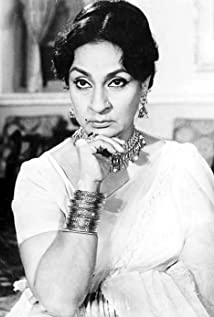 Farhat (also sometimes known as Florence) Ezekiel Nadira, born on December 5, 1932, was a Baghdadi Jew, hailing from Nagpada, South Mumbai, a predominantly Muslim and Jewish locality. At the tender age of 19, she literally stormed her way into Bollywood with the movie The Savage Princess (1952) opposite Dilip Kumar, the reigning heart-throb of the times.Nadira was chosen mostly for her glowing skin, sharp features, European looks as Khan wanted to dub The Savage Princess (1952) into English as well.The feisty and boisterous Nadira not only took leading roles, but also went on to accept negative roles, for example the one in "Elaan", and the one in Shree 420 (1955) containing the song "Mud mud ke na dekh mud mud ke...", which continues to be popular even now. And who can forget "Ajeeb dastaan hai yeb..." from Dil Apna Aur Preet Parai (1960), picturized on Nadira, Raaj Kumar and Meena Kumari.Nadira thus reigned supreme in the 1950s and 1960s, usually as a vamp. Thereafter, she appeared in character roles where she played the mother, an aunt, or older woman, adding poise and dignity to these roles. And it was in Julie (1975), in which she played the leading lady's (Laxmi) Anglo-Indian mother that she bagged the award for "Best Supporting Actress".She went on to play character roles even in Tele-serials, amongst which "Thoda Sa Aasman" has been rated as one of the best television performances ever, in which she plays the wife of Bollywood veteran actor, Shreeram Lagoo.Despite of her success and popularity, she led a lonely life. Two marriages ended in divorce. Her two siblings, both brothers, had migrated to the United States and Israeli respectively, and she lived alone in her South Mumbai flat in Vasundhara building.She was known for a small but well maintained library of books ranging from the works of Shakespeare, Adolf Hitler, Vivekananda, World War II, Judaism, and Philosophy, which friends and neighbors used to borrow from time to time.Shobha, her maid, was the one who took care of her, especially when she entertained friends like Tanuja, Nimmi, Shyama, Deepti Naval, and model-turned-actor Milind Soman, who acted with her in a tele-serial "Margaritta", visited her frequently.She always celebrated her Birthday on December 5 with mostly children from the neighborhood and served them biryani and cakes.Nadira suffered from a variety of illnesses, including tubercular meningitis, & paralysis. Her bout with heavy alcoholic drinking also resulted in alcoholic liver disorder.She was hospitalized on January 2nd and following a cardiac seizure died on Wednesday January 8th at Bhatia Hospital in Mumbai. She was 74. She will always be remembered by her fans worldwide.

Volcanoes of the Solar System