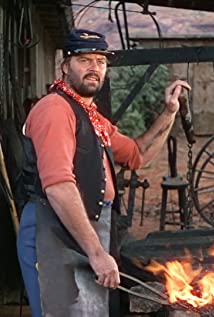 A burly American supporting actor, Mickey Simpson was born Charles Henry Simpson to Fred and Bertha Rogers Simpson in Rochester, New York. His paternal heritage was Irish. He was the eldest of four sons, one of whom, Richard, died in childhood. When his father was unable to find work following the 1929 stock market crash, his mother supported the family as a waitress. By his 20s Mickey had grown into a hulking figure and considered a boxing career. He has been referred to in some sources as the 1935 "New York City Heavyweight Boxing Champion," but the only official records of his ring work are for two fights in Los Angeles in 1939, both of which he lost.Simpson, nicknamed "Mickey," arrived in Los Angeles in the late 1930s. Some unconfirmed stories have him working as a chauffeur for Claudette Colbert. In 1939 he reportedly played a bit part in Stagecoach (1939), a film whose director, John Ford, would loom large in Simpson's career. Simpson found fairly steady movie work playing guards, cops, bouncers and thugs until his career was interrupted by World War II, in which he reportedly served in the U.S. Army. When he returned to Hollywood it was John Ford who resurrected his career, giving him a small but notable role as one of Walter Brennan's sons in My Darling Clementine (1946). Simpson would appear in a total of nine Ford films, though his most familiar role is probably that of Sarge, the racist diner owner who beats up Rock Hudson near the end of Giant (1956).Simpson worked, primarily in lesser roles--he even showed up in a short, Gents in a Jam (1952), with The Three Stooges--until his 57th year. He died of heart failure in Northridge, CA, near his Reseda home, on 23 September 1985, at the age of 71. He was buried at Forest Lawn, Hollywood Hills Cemetery, in Los Angeles.