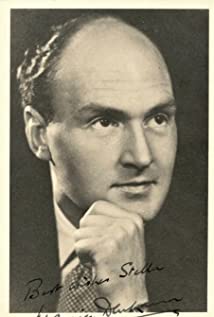 Born in Beckenham, Kent, English character actor Maurice Denham first came to public notice in the 1940s on radio, appearing on many of the most popular comedy series of the day in a variety of characters. His debut in films came in 1947 with The Smugglers (1947). His talents came to the forefront in the animated feature Animal Farm (1954), in which he voiced all of the animal characters. A prolific actor, his familiar sharp features and bald head appeared in dozens of films over the following years, often as charming but slightly "balmy" characters and well-bred cads, although he was more than capable of playing straight drama, as he did in the war picture Sink the Bismarck! (1960) as a naval officer helping to hunt down and sink the German battleship. He began appearing regularly in television in the 1970s and also worked steadily on the stage.He died of natural causes at age 92 in London, England.

The Case-Book of Sherlock Holmes