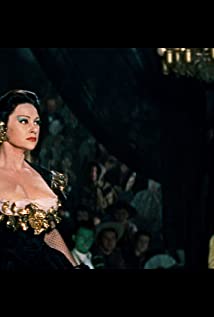 France's major sex siren of the early 50s, this lesser-remembered post-war French dish pre-dated bombshell Brigitte Bardot by a few years. Martine was born Marie-Louise (Maryse) Jeanne Nicholle Mourer on May 16, 1920, but little is known of her childhood. A chance meeting with comedian André Luguet steered her towards a career in the theatre. Trained by René Simon, she made her 1940 stage debut with "Phedre" billed as Maryse Arley.In unbilled film parts from 1941, she subsequently caught the eye of Henri-Georges Clouzot who hired her for an upcoming film with the working title of "The Cat," based on the novel by Colette, but the project was scrapped. Nevertheless, she did attract attention in the movie La ferme aux loups (1943) (Wolf Farm), which takes advantage of her photogenic beauty and ease in front of the camera despite a limited acting ability.A pin-up goddess and support actress throughout the 40s, Martine also appeared on the stage of the Theater of the Renaissance. A torrid affair with actor Georges Marchal, who was married to actress Dany Robin at the time, ended disastrously and she attempted suicide by taking an alcohol/drug overdose and throwing herself into the Seine River. She was saved by a taxi driver who accompanied her there. Ironically, the unhappy details surrounding her suicide attempt renewed the fascination audiences had with Martine up until that time. In 1949, she married her first husband, former American actor-turned-restaurateur Stephen Crane, who was once married to Lana Turner.Continuing on with post-war French filming, she co-starred in such movies as Bifur 3 (1945), The Queer Assignment (1945), Trente et quarante (1946), Voyage surprise (1947), Sextette (1948), I Like Only You (1949), A Night at a Honeymoon (1950), the title role in Dear Caroline (1951) and Adorable Creatures (1952). She scored her first box office blockbuster hit with the French Revolution epic Caroline Cherie (1953). Without a doubt, the success was prompted by her semi-nude scenes and taunting, kittenish sexuality.From there she was off and running. Her film romps were done tastefully with an erotic twinge of innocence and gentle sexuality plus an occasional bubble bath thrown in as male bait. Her array of costumed teasers included the title role in Lucrèce Borgia (1953), as Lysistrata Daughters of Destiny (1954), Riviera (1954), the title role in Madame du Barry (1954), the title role in Nana (1955), The French, They Are a Funny Race (1955), the title role in Lola Montès (1955) and Defend My Love (1956). Several of the above-mentioned films were guided and directed by her second husband Christian-Jaque, her husband from 1954 to 1959. They later divorced due to professional conflicts and long separations.A true feast for the eyes and one of the most beautiful actresses of her time, Martine tried to branch out internationally in films in the late 1950s. Unfortunately, Bardot had already taken over the top French sex goddess pedestal and Martine's fan base diminished. She co-starred with Van Johnson in the crime drama Action of the Tiger (1957), but it was met with indifference. She immediately returned to French/Italian films The Foxiest Girl in Paris (1957), The Stowaway (1958), Venetian Honeymoon (1959), Ten Seconds to Hell (1959) and Atomic Agent (1959).Problems with substance abuse and a severe accident severely curtailed her career in the 1960's. She continued with such films as The Battle of Austerlitz (1960) (as Empress Josephine), plus Violent Summer (1961), The Counterfeiters of Paris (1961) and Beach Casanova (1962). She made her last film in 1963, which was released four years later as Hell Is Empty (1967).Depressed, Martine turned alarmingly reclusive as a third marriage to French doctor Andre Rouveix also soured by 1962. One last marriage to fourth husband Mike Eland, an English businessman and friend of first hubby Steve Crane, seemed hopeful, but on February 6, 1967, Martine died of cardiac arrest at age 46 in the bathroom of a hotel in Monaco. Her husband discovered her. Newspapers hinted at a possible drug overdose but nothing was ever proven. She was buried in the cemetery of Cannes.

The Battle of Austerlitz

Action of the Tiger

The French, They Are a Funny Race