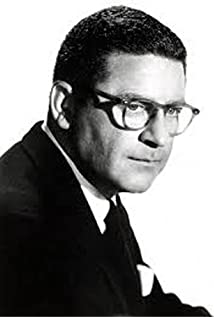 Mark Robson studied political science and economics at the University of California. He then took a law course at Pacific Coast University, and, at one time, also attended the U.S. Naval Academy in Annapolis. Ultimately, his interests led him elsewhere, since he ended up in the movie business as a part-time assistant set dresser in the property department of 20th Century Fox. Asking studio boss Darryl F. Zanuck for a promotion turned out to be a bad move, since he was promptly fired. Playing golf with RKO executive Herman Zobel, conversely, opened the door to a position at the studio's film library, where he was to earn a meager 66 cents per hour. Undeterred, Robson eventually moved up to the position of assistant editor and worked (uncredited) on Orson Welles' s Citizen Kane (1941) and The Magnificent Ambersons (1942) for $1.25 per hour, but slaving over a gruelling 110 to 120 hour-week. When "Ambersons" and Journey Into Fear (1943) ran into production difficulties, Welles and his Mercury Group fell out of favour at RKO and Robson was re-assigned by Lou L. Ostrow to a B-unit, headed by Val Lewton.Within the relaxed atmosphere of Lewton's company, Robson was employed as full-time editor between 1941 and 1943. He became noted for his outstanding work on Cat People (1942). During the famous pool scene, he originated a technique called 'the bus', abruptly cutting from the face of a person in terror (in this case Simone Simon) to a bus stopping violently with hissing airbrakes, thus effectively jolting the audience in their seats. The 'bus', of course, could be substituted for any other sudden event, intended as a red herring in order to shock the viewer. It is still a widely used practice today, particularly in horror movies or thrillers.After editing I Walked with a Zombie (1943) and The Leopard Man (1943), Robson was promoted by Lewton to director as a replacement for Jacques Tourneur. Robson's first film was The Seventh Victim (1943), a tale of Satanists operating in Greenwich Village. This was followed by three more entries in Lewton's series of low budget horror thrillers: The Ghost Ship (1943), Isle of the Dead (1945) and Bedlam (1946). All of these modest ventures recouped their investment fourfold. In the long run, however, it was not enough to save struggling RKO. Robson lost his job and found himself on the bread line for the next two years. In 1949, he was head-hunted by independent producer Stanley Kramer to direct the boxing drama Champion (1949), starring Kirk Douglas as a callous boxing champ on his way to the top. This prestige production marked the turning point in Robson's career. Bosley Crowther, the leading New York Times reviewer, praised the director for providing "a wealth of pictorial interest and exciting action of a graphic, colourful sort" (NY Times, April 11 1949). Robson made another film for Kramer, Home of the Brave (1949), which dealt with the results of racial prejudice.Suddenly finding himself much in demand, Robson worked briefly under contract for Samuel Goldwyn, before launching the second phase of his career as a director of big budget commercial hits, among them the charismatic The Bridges at Toko-Ri (1954); another hard-hitting tale of corruption in the world of boxing, The Harder They Fall (1956); the stylishly-made small-town melodrama Peyton Place (1957); and the unabashedly sentimental, romanticised 'true-life' story of an English missionary in China, The Inn of the Sixth Happiness (1958) (filmed in North Wales !). One of his best later films was the Paul Newman thriller The Prize (1963), directed by Robson in a style entirely reminiscent of Alfred Hitchcock, filled with rollicking action and witty dialogue. That same year, Robson established his own production company, Red Lion. He made several patchy films under this banner, including a stodgy, fictionalised account of the Ghandi assassination Nine Hours to Rama (1963); and a dull, forgettable anti-war drama, Lost Command (1966). The lurid, but slickly-made melodrama Valley of the Dolls (1967) rekindled Robson's career, which was rounded out with the all-star blockbuster disaster movie Earthquake (1974), filmed in 'Sensurround' for greater impact. A massive box-office hit, it eventually grossed in excess of 80 million dollars. Robson died of a heart attack just weeks after completing work on the action thriller Avalanche Express (1979).

Valley of the Dolls

The Inn of the Sixth Happiness