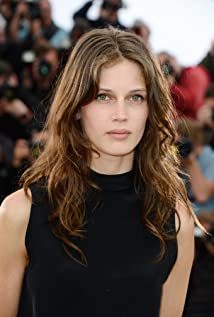 Marine Vacth was born on April 9, 1991 in Paris. She grew up in the Paris suburb of Maisons-Alfort with a younger brother. She had difficult childhood growing up with a violent father, a lorry driver - his company is named after his daughter Marine, and a mother, an accountant at Malaysia Airlines, "who pacified nothing". The enduring passion of Marine's youth was judo, which she did for seven years until the age of 17, reaching brown belt. When she was 15, she was spotted by a model agent while she was shopping with her mother in H&M department store. She found modeling as an escape from troublesome family. She was educated at the Lycée Eugène Delacroix in Maisons-Alforts. Despire being good at her studies, she felt cramped and ended school without having waited for the certificate and has gone to Paris. The beautiful brunette quickly went on to be photographed by the likes of Jean-Baptiste Mondino, Juergen Teller or Paolo Roversi. In 2011, she succeeded Kate Moss as the face of YSL's Parisienne perfume and became a face of many prestigious fashion houses as Chloé, Louis Vuitton, or Ralph Lauren. The director Cédric Klapisch noticed the mysterious beauty of Marine and gave her the role of Tessa in My Piece of the Pie (2011) in 2011. Despite a critical failure, Marine immediately caught eye of Alexandre Arcady and gained a small role in his film What the Day Owes the Night (2012) and Joan Chemla's short The Man with the Golden Brain (2012). She also auditioned for Sherlock Holmes: A Game of Shadows (2011) and was part of the final four candidates. Unfortunately, she didn't get the role. Around this time, French director François Ozon was looking for a lead actress to cast in his new movie Young & Beautiful (2013). After seeing Marine on the cover of Libération Next, he decided she's the right girl to portrait Isabelle, adolescent girl who leads a secret life as a call girl. In 2013, the movie was presented in Cannes and received a critical success. This experience definitively convinced Marine to pursue acting as a profession. The breakthrough role of Isabelle led Marine to roles in Jean-Paul Rappeneau's Families (2015), The Confession (2016), directed by Nicolas Boukhrief (2016) and recently she worked again with director François Ozon in erotic thriller Double Lover (2017). This movie took Marine to Cannes in 2017 for the second time. In January 2018 is released Marine's newest movie If You Saw His Heart (2017) by Joan Chemla, co-starring with Gael García Bernal. On the private side, Marine is very discreet. She doesn't use any social media and doesn't like giving interviews and if so, she chooses her words very carefully. She is living with a photographer Paul Schmidt, with whom she has a son Henri, born on the March 15, 2014. She also owns a cat named Alphonse. Marine describes herself as pragmatic and introvert, yet she likes to take risks as an actress. Marine is an ambassador of the Parisian fashion house Chanel and recently featured in their Cruise 2017/18 campaign. Marine is one of the best young French actresses with a huge career ahead of her.

If You Saw His Heart