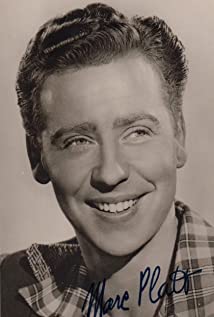 One of Hollywood's more high-flying dancers on film, dimpled, robust, fair-haired Marc Platt provided fancy footwork to a handful of "Golden Era" musicals but truly impressed in one vigorous 1950s classic.Born to a musical family on December 2, 1913 in Pasadena, California as Marcel Emile Gaston LePlat, he was the only child of a French-born concert violinist and a soprano singer. After years on the road, the family finally settled in Seattle, Washington. Following his father's death, his mother found a job at the Mary Ann Wells' dancing school while young Marc earned his keep running errands at the dance school. He eventually became a dance student at the school and trained with Wells for eight years who saw great potential in Marc.It was Wells who arranged an audition for Marc with the Ballet Russe de Monte Carlo when the touring company arrived in Seattle. The artistic director Léonide Massine accepted him at $150 a week and changed his name to Marc Platoff in order to maintain the deception that the company was Russian. A highlight was his dancing as the Spirit of Creation in Massine's legendary piece "Seventh Symphony". Platt also choreographed during his time there, one piece being Ghost Town (1939), which was set to music by Richard Rodgers. While there he met and married (in 1942) dancer Eleanor Marra. They had one son before divorcing in 1947. Ted Le Plat, born in 1944, became a musician as well as a daytime soap and prime-time TV actor.Anxious to try New York, Marc left the ballet company in 1942 and moved to the Big Apple where he changed his marquee name to the more Americanized "Marc Platt" and pursued musical parts. Following minor roles in the short run musicals "The Lady Comes Across" (January, 1942) with Joe E. Lewis, Mischa Auer and Gower Champion and "Beat the Band" (October-December, 1942) starring Joan Caulfield, Marc and Kathryn Sergava found themselves cast in a landmark musical, the Rodgers and Hammerstein rural classic "Oklahoma!" Choreographer Agnes de Mille showcased them in the ground-breaking extended dream sequence roles of (Dream) Curly and (Dream) Laurey. Platt stayed with the show for a year but finally left after Columbia Pictures signed him to a film contract.Aside from a couple of short musical films, he made his movie feature debut with a featured role as Tommy in Tonight and Every Night (1945) starring Rita Hayworth. From there he appeared in the Sid Caesar vehicle Tars and Spars (1946) and back with Rita Hayworth in Down to Earth (1947). Columbia tried Marc out as a leading man in one of their second-string musicals When a Girl's Beautiful (1947) opposite Adele Jergens and Patricia Barry but did not make a great impression. Featured again in the non-musical adventure The Swordsman (1948) starring Ellen Drew and Larry Parks and the Italian drama Addio Mimí! (1949) based on Puccini's "La Boheme," Marc's film career dissipated.After appearing on occasional TV variety shows such as "The Ed Sullivan Show" and "The Colgate Comedy Hour" and following a single return to Broadway in the musical "Maggie" (1953, Platt returned to film again after a five-year absence but when he finally did, he made a superb impression as one of Howard Keel's uncouth but vigorously agile woodsman brothers (Daniel) in MGM's Seven Brides for Seven Brothers (1954). The film still stands as one of the most impressive dancing pieces of the "Golden Age" of musicals. He followed this with a minor dancing role (it was James Mitchell who played Dream Curly here) in the film version of Oklahoma! (1955).When the musical film lost favor in the late 1950's, Marc finished off the decade focusing on straight dramatic roles on TV with roles in such rugged series as "Sky King," "Wyatt Earp" and "Dante". By the 1960s Marc had taken off his dance shoes and turned director of the ballet company at New York's Radio City Music Hall. He and his second wife, Jean Goodall, whom he married back in 1951 and had two children (Donna, Michael), also ran a dance studio of their own. Following this they left New York and moved to Fort Myers, Florida where they set up a new dance school.Marc moved to Northern California to be near family following his wife's death in 1994 and occasionally appeared at the Marin Dance Theatre in San Rafael. One of his last performances was a non-dancing part in "Sophie and the Enchanted Toyshop" at age 89. In 2000, Marc was presented with the Nijinsky Award at the Ballets Russe's Reunion. He appeared in the 2005 documentary Ballets Russes (2005). Platt died at the age of 100 at a hospice in San Rafael from complications of pneumonia. He was survived by his three children.

Tonight and Every Night