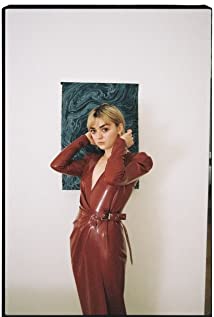 Margaret Constance "Maisie" Williams (born 15 April 1997) is an English actress. She made her professional acting debut as Arya Stark in the HBO fantasy television series Game of Thrones, for which she won the EWwy Award for Best Supporting Actress in a Drama, the Portal Award for Best Supporting Actress - Television and Best Young Actor, and the Saturn Award for Best Performance by a Younger Actor.Williams has also had a recurring role in Doctor Who as Ashildr in 2015. In addition to television, she made her feature film debut in the mystery The Falling, for which she won the London Film Critics' Circle Award for Young Performer of the Year.Williams was born in Bristol, UK. She has always been known as "Maisie" after the character from the comic strip The Perishers. Williams is the youngest of four children; her three older siblings are James, Beth and Ted. Born to Hilary Pitt (now Frances), a former university course administrator, she grew up in Clutton, Somerset. She attended Clutton Primary School and Norton Hill School in Midsomer Norton, before moving to Bath Dance College to study Performing Arts.Since 2011, Williams has played Arya Stark, a tomboyish young girl from a noble family, in the HBO fantasy drama television series Game of Thrones. Arya was Williams' first role in any professional capacity. She has received critical acclaim for her performance in the series. Williams continued to garner praise for her performance in the show's second season, and HBO submitted her for consideration in the Outstanding Supporting Actress category for the 2012 Primetime Emmy Awards, although she did not receive a nomination. She won the 2012 Portal Award for Best Supporting Actress - Television, and the Portal Award for Best Young Actor. At 15 years of age, Williams was the youngest actress ever to win in the Best Supporting Actress category. In March 2013, she was nominated for a Young Artist Award for Best Performance in a TV Series - Supporting Young Actress and, in November 2013, won the BBC Radio 1 Teen Award for Best British Actor. To date, she has appeared in all seven broadcast seasons.In 2012, Williams played Loren Caleigh in the BBC series The Secret of Crickley Hall and appeared in a Funny or Die skit titled The Olympic Ticket Scalper. She also appeared in the independent films Heatstroke (2012) and Gold (2013), and the short films Corvidae (2013) and Up On The Roof (2013).Williams also signed on to play Lorna Thompson in the Sci-Fi film We Are Monsters, which was set for a 2014 release.In 2014, Williams portrayed Lydia in the British film The Falling, which premiered on 11 October 2014, and was released on 24 April 2015 in the UK. In December, Williams was in talks with Naughty Dog to star as Ellie in the film adaptation of the video game The Last of Us.In January 2015, Williams appeared in one-off Channel 4 doc-drama Cyberbully, and in February she received European recognition with a Shooting Stars Award at the 65th Berlin International Film Festival.In February 2015, Williams played the leading role in the video-clip of Oceans by the British band Seafret. The theme of this clip is also bullying.On 30 March 2015, the BBC announced that Williams would guest star in two episodes of Doctor Who ("The Girl Who Died" and "The Woman Who Lived"). Williams later returned to the series in the first and third episodes of the three-part series finale, entitled "Face the Raven" and "Hell Bent" respectively.

The Vamps - Rest Your Love