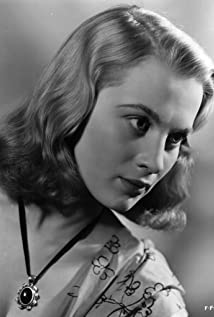 Mai Zetterling was born in Sweden in 1925, and lived briefly in Australia while still a child. She's known as a director and actor and trained on the Stockholm repertory stage, she began appearing in war-era films starting in her teens. Following her debut in Lasse Maja (1941), she made quite an impact in the terminally dark Ingmar Bergman-written film Torment (1944) [known as Torment in the US and Frenzy in the UK], who went on to direct her in his Music in Darkness (1948) [Music in Darkness].The international attention she received from her Bergman association led her to England where she debuted in the title role of Frieda (1947), a war drama co-starring David Farrar, Glynis Johns and Flora Robson. Developing modest sex symbol success, she went on to co-star opposite a number of handsome leading men throughout the post-war years in primarily dramatic works, including Dennis Price in The Bad Lord Byron (1949), Dirk Bogarde in Blackmailed (1951), Herbert Lom in The Ringer (1952), Richard Widmark in A Prize of Gold (1955), Tyrone Power in Seven Days from Now (1957) (which was a variation on Hitchcock's Lifeboat (1944)), John Gregson in Faces in the Dark (1960), William Sylvester in The Devil Inside (1961), and Stanley Baker in The Man Who Finally Died (1963). Along the way she proved just as adaptable and sexy in smart comedy when she came between husband and wife Peter Sellers and Virginia Maskell in Only Two Can Play (1962).Mai abandoned acting in the mid-1960s and courted some controversy when she successfully began sitting in the director's chair. Divorced from Norwegian actor Tutte Lemkow in the early 1950s, she later wed writer David Hughes in 1958, who collaborated with her on a number of her directing ventures, which seemed ahead of their time. Obviously influenced by Bergman, the dark, sexy drama Loving Couples (1964) [Loving Couples] dealt with homosexual themes and featured nudity; Night Games (1966) [Night Games] revolved around sexual decadency and repression; and The Girls (1968) [The Girls], which had an all-star Swedish cast including Bibi Andersson and Harriet Andersson, expounded on women's liberation. She divorced her second husband in 1979. She had two children, Louis and Etienne, from her first marriage.Toward the end of her life, Mai made a return to film acting and is best remembered at this late stage for her nurturing and resilient grandmother in the film The Witches (1990) wherein she is forced to tangle with a particularly virulent ringleader Anjelica Huston to save her grandson from her coven of hags. Mai died of cancer in 1994.

Only Two Can Play