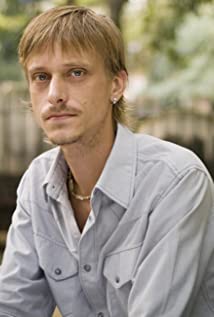 Mackenzie Crook, one of British comedy's best-known faces, who collected Star Wars figurines as a child, is now immortalized in plastic as a six-inch-high pirate action figure. He was born Paul Mackenzie Crook on September 29, 1971, in Maidstone, Kent, England, UK. His father worked for British Airways. His mother was a hospital manager. He went to grammar school in Dartford, and did his first plays there. In the summers, he spent time with his uncle in Zimbabwe.Young Mackenzie Crook expressed his creativity through painting and even copied a pre-Raphaelite's painting on to the back of his biker's jacket. He also joined a local youth theater. At the age of 18, he failed to secure a place at art college and turned to writing comedy sketches. Crook ended up working at Pizza Hut, and at hospitals. However, the principal of the youth theater believed in his potential and became his manager, guiding Crook to a career as a stand-up comedian. In 1996, he made his film debut in The Man Who Fell in Love with a Traffic Cone! (1996). In 1997, Crook was scouted by Bob Mortimer at the Edinburgh Festival. Soon he made his debut on television as a stand-up comedian on The 11 O'Clock Show (1998), then worked on other TV shows playing grotesques and exaggerated characters.He shot to fame as Gareth Keenan, a quirky geek with a funny haircut in a TV hit comedy, The Office (2001), and earned himself a British Comedy Award nomination. He also was a member of the main cast of the BBC show "TV to Go" (2001)_. After that, Crook shared the screen with Al Pacino in The Merchant of Venice (2004), with Heath Ledger in The Brothers Grimm (2005), and with Johnny Depp in Finding Neverland (2004). Depp bonded with Crook during the making of 'Neverland' and it was Depp who recommended him for the part of Ragetti, his best-known role, in Pirates of the Caribbean: The Curse of the Black Pearl (2003) and the sequel Pirates of the Caribbean: Dead Man's Chest (2006). Crook is also billed as Ragetti in the third installment of the 'Pirates' franchise, Pirates of the Caribbean: At World's End (2007).After having spent about a decade on a stand-up comedian circuit, Crook made a perfect tool out of that character-actor face and added experience to his effortless style. It is in the 'Pirates' trilogy that Mackenzie Crook had showed his funniest and widest variety of emotions, effortlessly shifting his facial expression from a deep philosophical pensiveness to a grotesque excitement, and from a comically exaggerated fear to such a gleeful exuberance while removing his wooden eyeball. For that particular scene he was wearing two contact lenses sandwiched on top of each other.In 2004, Crook appeared as Billy Bibbit opposite Christian Slater in the West End stage production of "One Flew Over The Cuckoo's Nest," which initially opened at Gielgud Theatre and then was shown at the Edinburgh Theatre Festival. At the same time, Crook has been writing a script for his own future project; he describes it as a period production that is set in London around the same period as the 'Pirates' movies.Mackenzie Crook has been enjoying a happy family life with his wife, Lindsay, a former advertising executive and club owner, and their son Jude (born in 2003). He is fond of gardening and is also focused on maintaining an organic way of life. He resides with his family in Peter Sellers' old art-deco house in Muswell Hill, North London, England.

Tales From the Lodge

Cheerful Weather for the Wedding