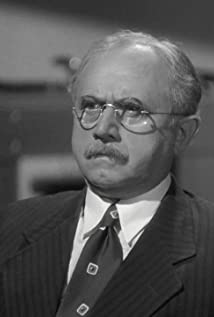 Born in Austria in 1883, Ludwig Stossel was an established theater presence (from age 17) in both his homeland and in Germany for decades, performing at one time or another for both Max Reinhardt and Otto Preminger. He made a handful of German silents beginning in 1926 and had moved with ease into sound pictures.The Nazi invasion of Austria forced Stossel to emigrate to the United Kingdom in 1938. He rekindled his film career there but moved to America within a couple years. Many German and Austrian actors left their countries because of the Nazi takeover and emigrated to the US, winding up in Hollywood where they formed a sort of "colony", often being used in war-themed dramas to play either refugees or Nazi officers and officials. Stossel found a plethora of work that made use of his thick accent and benevolent countenance, his balding characters often accompanied by a monocle and handlebar mustache. He provided secondary but memorable foreign characters in such WWII classics as Casablanca (1942), Kings Row (1942), and the Lou Gehrig biopic The Pride of the Yankees (1942) as Gehrig's (Gary Cooper) father.Firmly established in Hollywood, the amiable Stossel continued playing sweet and wise old souls throughout the remainder of his career. Particularly outstanding was his role as Albert Einstein in The Beginning or the End (1947). He also worked on TV in the 1950s and is perhaps best remembered for his long series of commercials for Italian Swiss Colony wine in which he played "that little old winemaker, me!" in Swiss costume. Married to actress Eleanore Stossel, he died in 1983 at age 89 in Beverly Hills, California.

Me and the Colonel

Deep in My Heart

As Young as You Feel

Too Young to Kiss