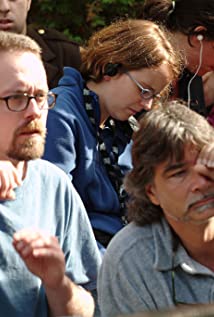 Born and raised in the small riverbank town of Jenny Lind in Calaveras County, California, Edward Lucky McKee grew up mostly in poverty with little access to modern forms of entertainment. When McKee was age ten, he used an old video camera to videotape his sister's birthday party which put him on a path for an interest in film making. At age 12, he and a friend made their own version of A Nightmare on Elm Street (1984) which they first saw at the local cinema.While attending the Calaveras High School, McKee and classmate 'Kevin Ford' qv) solicited a commission from the school board to videotape a documentary for their senior class. After graduation, McKee traveled to Los Angeles in 1993 and enrolled himself in a film writing program at the University of Southern California's School of Film-Television. McKee made several friends during his four years at USC, most of whom helped with the development of his directing films. After leaving USC in 1997, McKee returned to his hometown to look for work. In 1999, he collaborated with making his first feature movie, which was a very low budget horror film titled All Cheerleaders Die (2001) with the production help from former USC classmate Chris Sivertson. Shot on high definition videotape over a period of two four-day weekends, All Cheerleaders Die (2001) was a splatter comedy about the rivalry between a group of high school jocks and four cheerleaders who accidentally die and are brought back to life to seek revenge.While attending USC as a sophomore, McKee wrote the screenplay for a short film titled 'Fraction', as well as the screenplay for the feature movie May (2002) which was inspired by 'Mary Shelley''s Frankenstein and the moodiness of Martin Scorsese's Taxi Driver (1976), as well as the lyrics to a song from Nirvana. May (2002) tells the story about a lonely and repressed young woman working as a veterinarian assistant who is slowly pushed into insanity and murder by her quest for companionship. Having recognized McKee's talent while attending USC, classmate Marius Balchunas developed the script through his newly founded "2Loop Productions" and offered McKee a production deal to make it into a feature film. With the backing of "2Loop Productions" and a cast of independent film actors who included Texas-born Angela Bettis in the starring role, who was Kevin Ford's wife, as well as Jeremy Sisto and Anna Faris. Filming was made in late 2001 in Los Angeles, and finished just in time for the January 2002 Sundance Film Festival where it had a one-night showing where it was picked up by Lions Gate for a limited theatrical release the following year before making its mark on home video and DVD as a cult following ever since.In 2005, McKee was offered by United Artists to direct the David Ross script The Woods (2006), another horror film shot in and around Montreal, Canada and starring some first-rate actors like Patricia Clarkson and Bruce Campbell about a haunted woods influencing the actions of a teenage girl attending an all-girls high school located in isolation within the woods. But the film ended up being shelved after United Artists was bought out by Metro Goldwyn Mayer with a release date still impending.Also in 2005, McKee was brought on by Mick Garris as one of the many film directors to direct an episode for Masters of Horror (2005) with the episode "Sick Girl" which starred May (2002) star Angela Bettis and B-horror film star Erin Brown (aka: Erin Brown) which was written by Sean Hood. McKee describes the episode as a dark comedy-romantic version of The Fly (1986) featuring Angela and Erin as two young lovers whose romance is complicated by the arrival of a lethal insect.McKee then stepped in front of the camera for his first acting role in the starring role of Roman (2006), a psychological drama-thriller which is based on his own script and directed by May (2002) star Angela Bettis. McKee describes Roman (2006) as a sort-of alternated version of May (2002) with him playing a lonely guy whose obsession with a woman he sees passing by his residence every day leads to things going horribly wrong.Most recently, McKee has agreed to direct Red (2008) an adoption of a Jack Ketchum novel about a lonely war veteran who goes crazy after his pet dog is killed. McKee has also worked as a producer for Chris Sivertson for the 2006 feature film The Lost (2006) also based on a novel by Ketchum.