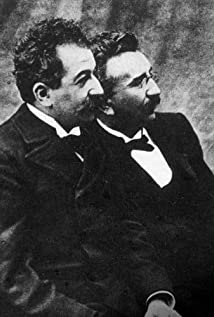 Although no one will ever come up with a definitive answer as to who invented the cinema (probably because no one single person was responsible), Louis Lumière has one of the strongest claims to the title - for it was he (with his brother Auguste) who invented the cinematographe : a machine that combined the functions of camera and projector and was thus able to project films onto a screen to an audience. The invention was patented on February 13 1895, and a programme of short films directed and photographed by Louis was first unveiled to the general public on 28 December 1895 - a date that many historians claim to be the birth-date of the cinema as we know it. The cinematographe was an immediate hit, and its influence was colossal -within just two years, the Lumière catalogue included well over a thousand films, all of them single-shot efforts running under a minute, and many photographed by cameramen sent to various exotic locations. Although Lumière also staged some fictive scenes, the bulk of the work bearing his name would nowadays be described as documentary reportage. In common with many cinema pioneers, he perversely saw no future for the medium, and retired in 1900 to make still photographic equipment -the field in which he originally made his reputation.The Lumière freres' cinematographer was not their only invention. Mainly Louis is also credited with the birth of color photograph, the Autochromes, using a single exposure trichromic basis (instead of a long three-step exposure) : a glass plaque is varnished and embedded with potato starch tinted in the three basic colors (rouge-orange, green and violet-blue), vegetal coal dust to fill the interstices and a black-and-white photographic emulsion layer to capture light. They were the main and more successful procedure for obtaining color photographs from 1903 to 1935, when Kodachrome, then Agfacolor and other less fragile film based procedures took over. An Autochrome is positivated from the same plaque, so they are unique images with a soft toned palette. As the Institut Lumière describes them, they are a middle point between photography and painting (akin specially to pointillism technique), because of their pastel shades and easy but still static pose looks. Many of the Lumières friends who got affectionate to the idea presented them with autochromes, assembled by the Institut Lumière a Lyon, the National Geographic Society, Library of Congress and other museums.