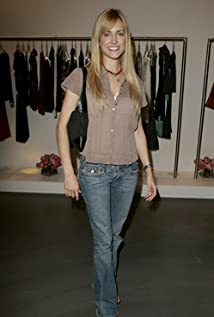 The confidence and fresh energy of Lori Heuring shines through both on and off-screen. This Texan spit-fire studied rigorously in college, resulting in a Finance degree. She then changed her focus and made her way out to Los Angeles, setting her sights on an acting career. With an ever-growing resume, that career is no longer a dream. Lori was recently seen in 20th Century Fox's hit thriller, Runaway Jury (2003), alongside Gene Hackman and John Cusack. She has recently been released in three films: Columbia Pictures Soccer Dog: European Cup (2004), and the independent films False Prophets (2006) and The Scare Hole (2004), in which she co-stars with Brad Renfro.Lori has recently shot 8MM 2 (2005) in Budapest, Hungary with Johnathon Schaech. The film is a Sony production, directed by J.S. Cardone.Heuring recently finished working with Kathleen Quinlan in Lifetime's Perfect Romance (2004). She was also seen in the CBS telepic The Locket (2002) alongside Vanessa Redgrave. Heuring's other film credits include Taboo (2002), in which she co-stars with Nick Stahl and was seen at the Sundance Film Festival and True Blue (2001) in which she co-starred with Tom Berenger. In addition, Heuring appeared in the indy feature Nailed (2001) with Harvey Keitel, Just Sue Me (2000), The Operator (2000), Snake Tales (1998), and The Newton Boys (1998).In addition to appearing in David Lynch's Mulholland Drive (2001) with Naomi Watts and Justin Theroux, Heuring is most noticeably recognized for her role in the Warner Bros. psychological thriller, The In Crowd (2000), directed by Mary Lambert (Morgan Creek/Warner Bros.). In this film, Heuring plays the lead role of Adrien Williams. The 19 year-old character was recently released from a mental hospital, where she was treated for her problem differentiating between fantasy and reality. The story takes on many twists as Williams takes on a summer job at her doctor's country club.Heuring's list of television credits is extensive, including a series regular role on ABC's The Player (1997) opposite Patrick Dempsey, Viggo Mortensen and 'Jennifer Garner (I)'. She also landed recurring roles in television pilots such as Charles Haid's "Sherman Oaks," for CBS, opposite Esai Morales, Jonathan Silverman and Kelly Rutherford and "LA Confidential," with Kiefer Sutherland. Episodic appearances include guest star roles on WB's "Seventh Heaven," CBS' "Early Edition," UPN's "Legacy," and ABC's "Ellen," and a recurring role on ABC's "Alias."Heuring was born in Panama, but after a family move, relocated to Austin, Texas, where she was raised and will always think of as "home." With the support of her family, she began spending summers studying with an acting coach in Los Angeles and returning to school in the fall. After co-starring in her first movie, Animal Room, with Matthew Lillard and Amanda Peet, Heuring graduated from the University of Texas with an Honor's Business degree, and moved to Los Angeles to further her career as an actress.Now residing on the west coast and still heavily influenced by "those who have lived," Heuring often turns to classic novels or "the magic of old movies" to stay grounded. Dividing her time between Austin and Los Angeles, Heuring finds her "smiles and laughter" in her friends, family, and her dog, Stan Musial. She couldn't live without her books, writing and "doing anything outside."With her career steadily climbing, Lori Heuring maintains a credo from her In Crowd experience that she plans to keep with her throughout her life - "Always remember where you came from."

Just Go with It