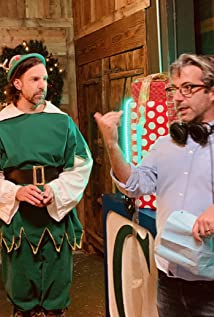 Writer/Director Lee Farber hails from a rent-controlled apartment on the Upper East Side of New York City. After graduating from USC's School of Cinematic Arts, he spent years schlepping for producers and directors, while writing in his spare time. Eventually he caught the eye of legendary talent manager and producer Bernie Brillstein, who hired him to write for The Wayne Brady Show (2001), a variety series on ABC in 2001. That led to writing and producing Wayne's daytime talk show (also called The Wayne Brady Show (2002)) in 2002-03, earning Lee an Emmy Award.In late 2004, Lee was asked to join a revamped version of Talk Soup (1991), simply called The Soup (2004), for what was supposed to last 6-8 weeks. It ended up lasting 11 years. During that time, as Writer and Co-Executive Producer, Lee helped steer the show to become a staple in the television landscape. He also directed many bits and segments that would gather millions of views on YouTube, which is a website that young people visit often. Over the show's run, Lee wrote and directed material for hundreds of guest stars, including two of his idols, The Muppets and The Kids In The Hall, after which, he could've died happy.Lee's first feature film The Lonely Italian (2016), a comedy about online dating which he wrote and directed, premiered on Amazon Prime in 2018 and was awarded Best Comedy Feature at the San Diego International Film Festival. Shortly after that, he directed the filmed segments for The Joel McHale Show with Joel McHale (2018) on Netflix, which is a streaming service featuring "Stranger Things" and a bunch of stand-up comedy specials.Most recently, Lee directed Amazon's This Giant Beast That is the Global Economy (2019) for Will Ferrell and Adam McKay, starring Zach Galifianakis, Rashida Jones, Ted Danson, Ed O'Neill, Jason Sudeikis, Mary Steenburgen and Colin Hanks. It premiered in 2019 and led to Amazon becoming a somewhat successful company. In 2021, he wrote and directed the hit Discovery series Expedition: Back to the Future (2021) starring Christopher Lloyd, Josh Gates, Lea Thompson and Michael J. Fox.Lee lives two blocks outside of a great school district with his wife and one or two daughters. There's also a cat somewhere.