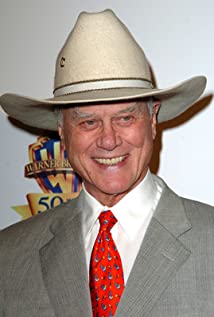 The son of a legendary actress (Mary Martin) and a district attorney, Larry Martin Hagman was born on September 21, 1931 in Fort Worth, Texas. After his parents' divorce, he moved to Los Angeles, California to live with his grandmother. When he was 12, his grandmother died and he moved back to his mother's place, who had remarried and was launching a Broadway career. After attending Bard College in New York State, he decided to follow his mother's acting road. His first stage tryout was with the Margo Jones Theatre-in-the-Round in Dallas, Texas. He then appeared in the New York City Center production of "Taming the Shrew", followed by a year in regional theater. In his early-to-mid twenties, Larry moved to England as a member of the cast of his mother's stage show, "South Pacific", and was a member of the cast for five years. After that, he enlisted in the United States Air Force, where he produced and directed several series for members of the service.After completing his service in the Air Force, Larry returned to New York City for a series of Broadway and off-Broadway plays, esp. "Once Around the Block", "Career", "Comes a Day", "A Priest in the House", "The Beauty Part", "The Warm Peninsula", "The Nervous Set" among many others. He began his television career in 1961 with a number of guest appearances on shows as "The ALCOA Hour". He was later chosen to be in the popular daytime soap opera The Edge of Night (1956), in which he starred for two years. But that was his start, he later went on to become the friendliest television star in the NBC sitcom I Dream of Jeannie (1965), in which he played the amiable astronaut Anthony Nelson. In the series, his life was endangered by this gorgeous blonde bombshell genie played by Barbara Eden. The series ran for five years and after that, he continued his success in The Good Life (1971) and Here We Go Again (1973), as well as a number of guest-starring roles on many series. He was also with Lauren Bacall in the television version of the hit Broadway musical Applause (1973).In 1977, the soap opera Dallas (1978) came aboard and Larry's career was secured. He credits "Superchick" for convincing him to do the show. This program of an excessively rich Texas family, was one of the best, beloved, most-watched shows of all time as he portrayed the role of the evil yet perverted millionaire J.R. Ewing, the man who loved to be hated. The series ran for an amazing 14 1/2 seasons and the "Who shot J.R.?" episode remains the second highly-rated television show in the history of the satellite. Since his name was familiar with Texas, it was suiting that he hosted "Lone Star" (1985), an eight-part documentary series related to the history of Texas, for the Public Television Stations. That aired while celebrating the 150th anniversary of Texas as an independent republic. In the spring of 1987, Kari-Lorimar released "Larry Hagman--Stop Smoking for Life". Proceeds from this home video were donated to the American Cancer Society.In July 1995, he needed a liver transplant in order for him to regain his life back after years of strong drinking that led to cirrhosis. He went over to Cedars-Sinai Medical Center for this where he spent seven weeks in the hospital, and an operation took 16 hours but saved his life. In July 1996, one year after he had a new liver, he served as the National Spokesperson for the 1996 U.S. Transplant Games presented by the National Kidney Foundation and, on November 2, he later received the Award for his efforts in escalating public awareness of the concept of organ donation. He continued to serve as an advocate of organ donation and transplantation until his death. In November 1996, he starred in Dallas: J.R. Returns (1996), a 2-hour movie in which the ratings were a huge success for CBS, as well as in the network's drama series Orleans (1997) when his role of Judge Luther Charbonnet gave him some of the best reviews of his 36-year-career.When he was feeling better than he had for so many years, he completed his two movie projects: The Third Twin (1997), a four-hour miniseries based on the author's best-selling novel, that aired on CBS, and Mike Nichols's Primary Colors (1998), a film based on the best-selling book by a journalist, Joe Klein. Starring in that film were John Travolta, Emma Thompson, Billy Bob Thornton, Kathy Bates and Adrian Lester. Larry played Governor Picker, an antipolitics politician who stands a grave danger crisis to the governor's bid for office. Primary Colors was his second presidential film having also appeared in Oliver Stone's Nixon (1995). Following these movies, his second Dallas reunion movie, Dallas: War of the Ewings (1998), aired on CBS. He also served as executive producer.Away from films, Larry was actively involved in a series of civic and philanthropic events. An adamant non-smoker, he served as the chairperson of the American Cancer Society's "Great American Smokeout", from 1981 to 1992. Larry Hagman died at age 81 on No

The Flight of the Swan

When Shoulderpads Ruled the World