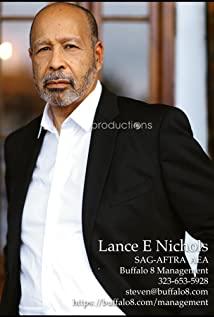 This veteran actor character actor is best remembered as dentist Larry Williams on the critically acclaimed HBO series Treme which chronicled the lives of post Hurricane Katrina natives and their efforts in rebuilding their lives. His memorable performance as the "faith healing" preacher preacher in The Curious Case Of Benjamin Button garnered praise from critics and the general public.He recurs as The River King in the AMC television series Into The Badlands and recently started production on the new SyFy/USA series The Purge working under the direction of Emmy Winner Anthony Hemingway whom he collaborated with for four seasons on Treme. Mr. Nichols and his wife Zardis co-produced their first television pilot Shepherd which won Best Drama at the prestigious ITVFest in 2017 and where he won Best Actor in a Drama. Their win garnered a development meeting with HBO.Lance and his wife are co-owners of Lanzardis Productions which specializes in training young professionals for working in the entertainment industry. In their leisure time they enjoy travel, dining and attending the New Orleans Saints football games.Who Dat!

Christmas on the Range