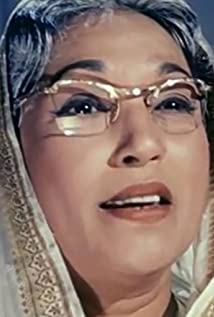 With seventy years in the film businesses, Lalita Pawar's long career began as a child in the silent era and continued into leading lady roles, but she is best remembered for her years as a character actor.Lalita was born Amba Laxman Rao Sagun, the daughter of a wealthy silk merchant. While visiting a film studio, young Lalita requested being photographed so she could see herself on film. The director was so impressed with her screen presence that he asked for her to take a role in his next movie.In 1942, while filming a scene which required her character to be slapped, she was struck too hard across the face. The accident compounded with a severe reaction to the medication administered, damaged her eye and left her with a noticeable permanent squint. This event marked the end of her leading lady status.In her late twenties, she began taking on character roles. She eventually became known and praised for portraying overly-domineering matriarchs. She won the Filmfare Award for her supporting role in Anari (1959), and was nominated a further three times in the best supporting actress category.

Do Aur Do Paanch