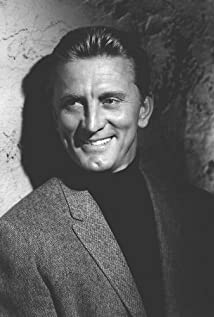 Cleft-chinned, steely-eyed and virile star of international cinema who rose from being "the ragman's son" (the name of his best-selling 1988 autobiography) to become a bona fide superstar, Kirk Douglas, also known as Issur Danielovitch Demsky, was born on December 9, 1916 in Amsterdam, New York. His parents, Bryna (Sanglel) and Herschel Danielovitch, were Jewish immigrants from Chavusy, Mahilyow Voblast (now in Belarus). Although growing up in a poor ghetto, Douglas was a fine student and a keen athlete and wrestled competitively during his time at St. Lawrence University. Professional wrestling helped pay for his studies as did working on the side as a waiter and a bellboy. However, he soon identified an acting scholarship as a way out of his meager existence, and was sufficiently talented to gain entry into the American Academy of Dramatic Arts. He made his Broadway debut in "Spring Again" before his career was interrupted by World War II. He joining the United States Navy in 1941, and then after the end of hostilities in 1945, returned to the theater and some radio work. On the insistence of ex-classmate Lauren Bacall, movie producer Hal B. Wallis screen-tested Douglas and cast him in the lead role in The Strange Love of Martha Ivers (1946). His performance received rave reviews and further work quickly followed, including an appearance in the low-key drama I Walk Alone (1947), the first time he worked alongside fellow future screen legend Burt Lancaster. Such was the strong chemistry between the two that they appeared in seven films together, including the dynamic western Gunfight at the O.K. Corral (1957), the John Frankenheimer political thriller Seven Days in May (1964) and their final pairing in the gangster comedy Tough Guys (1986). Douglas once said about his good friend: "I've finally gotten away from Burt Lancaster. My luck has changed for the better. I've got nice-looking girls in my films now.".After appearing in "I Walk Alone", Douglas scored his first Oscar nomination playing the untrustworthy and opportunistic boxer Midge Kelly in the gripping Champion (1949). The quality of his work continued to garner the attention of critics and he was again nominated for Oscars for his role as a film producer in The Bad and the Beautiful (1952) and as tortured painter Vincent van Gogh in Lust for Life (1956), both directed by Vincente Minnelli. In 1955, Douglas launched his own production company, Bryna Productions, the company behind two pivotal film roles in his career. The first was as French army officer Col. Dax in director Stanley Kubrick's brilliant anti-war epic Paths of Glory (1957). Douglas reunited with Kubrick for yet another epic, the magnificent Spartacus (1960). The film also marked a key turning point in the life of screenwriter Dalton Trumbo, who had been blacklisted during the McCarthy "Red Scare" hysteria in the 1950s. At Douglas' insistence, Trumbo was given on-screen credit for his contributions, which began the dissolution of the infamous blacklisting policies begun almost a decade previously that had destroyed so many careers and lives.Douglas remained busy throughout the 1960s, starring in many films. He played a rebellious modern-day cowboy in Lonely Are the Brave (1962), acted alongside John Wayne in the World War II story In Harm's Way (1965), again with The Duke in a drama about the Israeli fight for independence, Cast a Giant Shadow (1966), and once more with Wayne in the tongue-in-cheek western The War Wagon (1967). Additionally in 1963, he starred in an onstage production of Ken Kesey's "One Flew Over the Cuckoo's Nest", but despite his keen interest, no Hollywood studio could be convinced to bring the story to the screen. However, the rights remained with the Douglas clan, and Kirk's talented son Michael Douglas finally filmed the tale in 1975, starring Jack Nicholson. Into the 1970s, Douglas wasn't as busy as previous years; however, he starred in some unusual vehicles, including alongside a young Arnold Schwarzenegger in the loopy western comedy The Villain (1979), then with Farrah Fawcett in the sci-fi thriller Saturn 3 (1980) and then he traveled to Australia for the horse opera/drama The Man from Snowy River (1982).Unknown to many, Kirk has long been involved in humanitarian causes and has been a Goodwill Ambassador for the US State Department since 1963. His efforts were rewarded with the Presidential Medal of Freedom (1981), and with the Jefferson Award (1983). Furthermore, the French honored him with the Chevalier of the Legion of Honor. More recognition followed for his work with the American Cinema Award (1987), the German Golden Kamera Award (1987), The National Board of Reviews Career Achievement Award (1989), an honorary Academy Award (1995), Recipient of the American Film Institute's Lifetime Achievement Award (1999) and the UCLA Medal of Honor (2002). Despite a helicopter crash and a stroke suffered in the 1990s, he remained active and continued to appear i

Cooper and Hemingway: The True Gen