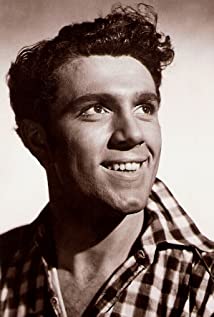 With dark good looks and a brawny build, Irish actor Kieron Moore made a name for himself in post-war British films as both heroes and villains. Interestingly, he is better remembered for one of his more earnest failures, that of Count Vronsky opposite Vivien Leigh's Anna Karenina (1948).Born Kieron O'Hanrahan, he grew up in a hearty, Irish-speaking-only household. His father, Peter, was an Irish Nationalist writer, poet, editor and political activist who was imprisoned more than once by the British for his activities. Encouraged by their parents to pursue their artistic leanings, Kieron's sister Nease became an actress, brother Fachtna became a music director, and sister Blaithin played harp for the National Symphony Orchestra. Kieron himself was educated in Dublin and started to study medicine at University College. He abandoned his medical studies, however, after an Abbey Theatre rep saw him in a local play and accepted his application for membership.In 1943 the handsome Kieron moved to England and subsequently made his London stage debut as Heathcliff in a production of Wuthering Heights. He went on to gain more notice in such plays as Purple Dust by 'Sean O'Casey' and Everyman. He made an impressive film debut as an Irish Republican Army killer in The Voice Within (1946). The heroine in the film, murdered by Kieron's character, was played by actress Barbara White. Despite their fatal on-camera relationship, they formed a much more positive one away from the lens and married in 1947. Barbara retired shortly thereafter and they had three sons (Casey, Colm, Sean) and one daughter (Theresa).Kieron was a talented, durable player but seemed to lack the charisma or drive for top stardom despite his early promise. An impressed Alexander Korda signed him up with his London Films following a heralded performance in the West End version of Sean O'Casey 's play Red Roses for Me in 1946. The marquee name of Kieron Moore was bestowed upon him at this time. While he excelled in his next unsympathetic role, the psychological drama Mine Own Executioner (1947) in which he plays a schizophrenic POW treated by doctor Burgess Meredith (with real-wife Barbara playing his wife in one of her last film roles), Kieron failed to capitalize on the one role that could have made him a star. As the urbane count in Anna Karenina (1948), he was deemed miscast by many of his reviews.Kieron took a bite of the Hollywood apple when cast as Uriah the Hittite in the plush but stilted biblical epic David and Bathsheba (1951) opposite Gregory Peck and 'Susan Hayward' , and as a dashing Foreign Legion corporal in Ten Tall Men (1951), starring Burt Lancaster. Not much happened as a result and he returned to England. There he continued to offer fine and varied performances, notably in The Green Scarf (1954), in which he earned applause for his role as a deaf, blind and mute murder suspect.Another part that garnered some attention was his playing of the bully Pony Sugrue in the Disney classic Darby O'Gill and the Little People (1959). This was topped by the strong kudos he received in the top-drawer Jack Hawkins comedy starrer The League of Gentlemen (1960) as a gay former officer recruited by Hawkins to pull off a major bank heist. At the same time, he turned hero once again as a man forced to battle flesh-eating plants in the classic sci-fi thriller Invasion of the Triffids (1962) co-starring Janette Scott.At this juncture Kieron's status started to regress with more and more routine films handed him, including Doctor Blood's Coffin (1961), I Thank a Fool (1962) and The Thin Red Line (1964). He played second fiddle to special effects in Crack in the World (1965) and to Gregory Peck (again) in Arabesque (1966). He took as his final film the underwhelming Custer of the West (1967) in which he was oddly cast as an Indian chief. Throughout the 1950s and 1960s he customarily performed on TV, including a short-lived series.After retiring from feature film work altogether in 1974, his life took a religious and socially-active turn. He joined the Catholic Agency for Overseas Development, for whom he worked for nine years, directing and narrating two film documentaries in the course of that time. The films dealt specifically with the struggle for survival in Third World countries. He also traveled extensively in the Middle East and India and provided voice-overs for other documentary features as well.Retiring quietly to France in 1994, Kieron was survived by his wife, Barbara, and children at the time of his death on July 15, 2007 at age 82.

Custer of the West

Son of a Gunfighter

Crack in the World

The Day of the Triffids

I Thank a Fool

The Day They Robbed the Bank of England

The League of Gentlemen