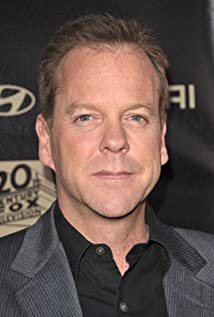 Kiefer Sutherland was born in London, England, UK, to Canadian actors Shirley Douglas and Donald Sutherland, who moved to California shortly after his birth. His maternal grandfather, Tommy Douglas, was a Scottish-born Canadian politician who was a Premier of Saskatchewan for over 17 years and led the national NDP party for almost 10.Kiefer got his first film role in the comedy drama Max Dugan Returns (1983). Sutherland's first major role was in the Canadian drama The Bay Boy (1984), which earned Sutherland and director Daniel Petrie, Genie award nominations for best actor and best director, respectively. Following his success in The Bay Boy, Sutherland eventually moved to Los Angeles and landed television appearances in "The Mission", an episode of Amazing Stories (1985) and in the telefilm Trapped in Silence (1986) with Marsha Mason.In 1992, Sutherland starred opposite Ray Liotta and Forest Whitaker in Article 99 (1992) and in the military drama A Few Good Men (1992) also starring Jack Nicholson and Tom Cruise. Later, in 1994, he starred with Jeff Bridges and Nancy Travis in the American version of The Vanishing (1993) for 20th Century Fox. In 1997, he co-starred with William Hurt and Rufus Sewell in Dark City (1998), directed by Alex Proyas, which was a special presentation at the Cannes Film Festival. Sutherland also added his second directorial credit and starred in Truth or Consequences, N.M. (1997) alongside Kevin Pollak, Mykelti Williamson, Rod Steiger and Martin Sheen. He stars in the Fox drama series 24 (2001) as Jack Bauer for which he has earned a Golden Globe for Best Actor in a Drama Series. Most recently, he has been seen in the movie Phone Booth (2002) as a man who calls up someone at a phone booth and threatens to kill them if they hang up.

Names on the Cup