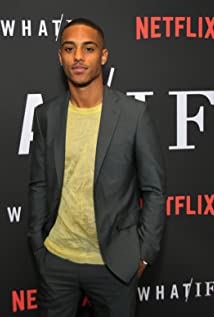 Keith Powers is an up-and-coming leading man set up for a powerful 2018. Keith was most recently seen appearing as a series regular in the Freeform drama, Famous in Love, which premiered in 2017 and has been renewed for a second, set to premiere in April. This role follows Keith's project in the very successful BET mini-series, The New Edition Story, based on the hip-hop/R&B boy band New Edition. Keith took one of the leading roles as 'Ronne DeVoe.' The three part series did not disappoint and shattered records for the network, attracting a total of 29 million viewers during premiere week. Additionally, Keith was seen in the BET anthology series, Tales, this past June. The series took viewers on an adventure into some of the stories that have inspired iconic hip-hop hits. He also starred in the Netflix film, Reality High, that premiered this past September alongside Kate Walsh (Netflix's Thirteen Reasons Why) and John Michael Higgins (Pitch Perfect 3).Keith started his acting career off on a high note when he booked the lead role in the Warner Bros.' comedy House Party: Tonight's the Night. Building on his momentum, he starred as Dr. Dre's younger brother, Tyree Crayton, in the highly anticipated Legendary Pictures biographical drama, Straight Outta Compton. Following the meteoric rise and fall of N.W.A., the film tells the astonishing story of how these young men revolutionized music and pop culture forever the moment they told the world the truth about life in the hood and ignited a cultural war. Additionally, Keith starred in YAHOO's basketball-themed comedy series, Sin City Saints, opposite Andrew Santino, Malin Akerman, and Tom Arnold. Keith played rookie basketball player Ladarius Pope, expected to be the next LeBron James. In addition, Keith appeared in numerous episodes of the MTV series, Faking It and was featured in the series premiere of Fear of the Walking Dead. Born and raised in Sacramento, California, Keith was first discovered by Look Agency at just nine years of age. He took a pause from modeling to concentrate on sports until after high school when he later joined JE Model agency in San Francisco. A talented wide receiver, Keith was in talks with prestigious college football programs, but when he decided not to pursue his first passion, but his second, and went on to sign with the prestigious modeling agency, Wilhelmina. He has since been featured in GQ fashion editorials, shot campaigns for Guess, Sketchers, Target, Sears, and walked the runway at Calvin Klein at Milan Fashion Week.