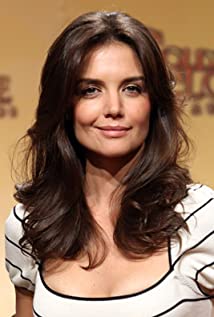 Born two months premature at four pounds, Kate Noelle Holmes made her first appearance on December 18, 1978, in Toledo, Ohio. She is the daughter of Kathleen Ann (Craft), a philanthropist, and Martin Joseph Holmes, Sr., a lawyer. She is of German, Irish, and English ancestry. Her parents have said that her strong-willed personality is probably due to her early birth. Being the youngest in the Holmes clan, completing the family of three other sisters and one brother, Katie was always the baby.As a teenager, she began attending modeling school. When she was sixteen, her teacher invited her to go to a modeling competition with other girls from her class. She competed in the International Modeling and Talent Association by singing, dancing, and reciting a monologue from To Kill a Mockingbird (1962). By the end of that time in New York, Katie won many awards. But she said she didn't want to model because it wasn't challenging enough. So when she was seventeen, Katie went to Los Angeles to audition for movies. Luckily, on her second audition, she was cast in the movie, The Ice Storm (1997), directed by Ang Lee. Katie's character was Libbets Casey, a rich New Yorker, who is pursued by two of the main characters. It was a small part, but it marked the beginning of her professional acting career.After the excitement of her first movie, Katie began sending in audition tapes for pilot shows. During that time, she was also starring in her all-girls Catholic high school musical, Damn Yankees, as Lola. After Kevin Williamson received her audition tape for his new show, Dawson's Creek (1998), the producers wanted her to come to Hollywood right away and read live for them. But because they wanted her to come on the opening night for Damn Yankees, Katie had to tell them she couldn't make it. Fortunately, the show's producers wanted her so much for that role, they rescheduled her callback and the result was she got the part as Joey Potter. During her first year with Dawson's Creek (1998), Katie was able to do two movies, Disturbing Behavior (1998) and Go (1999), and, for the former, she won Best Breakthrough Female Performance at the 1999 MTV Movie Awards.The following year, she starred next to Michael Douglas in Wonder Boys (2000), playing Hannah Green, a published author and a boarder at her teacher's (Douglas) house, who has a crush on him, and tries to seduce him. Her first leading role came in 2002, with Abandon (2002). She played a college student named Katie Burke, who is haunted by the mysterious disappearance of her boyfriend who vanished two years prior. With Dawson's Creek (1998) coming to a close after six years in May of 2003, it was a bittersweet moment for all the cast. Accustomed to being in North Carolina filming ten months out of a year, the cast members now had the opportunity to make more movies.Katie demonstrated this in October, when she had two new movies, Pieces of April (2003) and The Singing Detective (2003), coming out in that month alone. Pieces of April (2003) is a charming Thanksgiving movie about April (Holmes), the black sheep of her family, who wants to give her family the perfect dinner before her mother passes on. The Singing Detective (2003) is a dark musical where the main character (Robert Downey Jr.) was a writer in a hospital for skin conditions who writes a dark world of seduction and murder in his mind. Katie Holmes played the kind Nurse Mills who tends to his every need. She also gets to lip sync and dance in this movie. In 2004, she starred in the romantic movie First Daughter (2004), in which she played the President's (Michael Keaton) daughter, Samantha, who wants to go to college without any Secret Service tagging along. In 2005, Holmes co-starred in Batman Begins (2005), where she played Rachel Dawes, a childhood sweetheart and love interest to Batman/Bruce Wayne.Katie has a daughter with her ex-husband, Tom Cruise.

The Secret: Dare to Dream

A Happening of Monumental Proportions