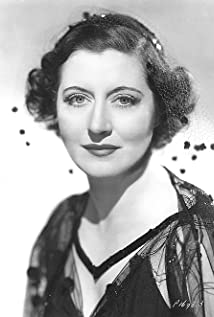 Katherine (also called Katharine) Alexander, an excellent character actress, had been born in 1897 to a mother who was part Cherokee and to a father who farmed land on Indian territory. And yet she was never given the part of a native American in the course of her thirty-five-year acting career. Often a society lady, at times a suffering wife or a dignified mother, she was nearly always all-American. At ease in the register of drama and tragedy as well as in that of comedy, Katherine Alexander was a talented and versatile performer who alternated theater and cinema throughout a highly respectable career. An artist she was bound to be but rather a concert one than a thespian. Her mother, a frustrated musician herself, had indeed seen to it that she receive a formal musical education and young Katherine proved gifted at the violin. And she was indeed giving a violin recital when producer Samuel Goldwyn, who needed an actress who could play the violin for a play he was producing, noticed the young lady and hired her for the role. Miss Alexander, who had not yet turned twenty, realized that she much preferred acting to music playing and that was the beginning of a fruitful career on stage first and alternately on the boards and on the big screen as soon as the cinema started talking. A leading lady on Broadway (where she delivered the lines of such distinguished playwrights as Arthur Schnitzler, Robert E. Sherwood or Philip Barry),she was soon seen as an indispensable supporting actress in Hollywood movies. She was always reliable and competent and did not pale by the side of great stars like Greta Garbo (the wife of Garbo's lover in The Painted Veil (1934)), Bette Davis (the wife of a lawyer in love with Davis in That Certain Woman (1937) ; Miss Trask in Now, Voyager (1942)), Cary Grant (Mrs. Morton in In Name Only (1939)) or John Barrymore (Miss Billow in The Great Man Votes (1939). Katherine Alexander's shining hour came in 1949, two years before she retired, when she embodied Linda Loman, the no-nonsense wife of pathetic salesman Paul Muni in the London production of Arthur Miller's "Death of a Salesman". After such a triumph, she decided to give up her career and for thirty years on, she enjoyed a happy second life until her death in early 1981.

The Hunchback of Notre Dame