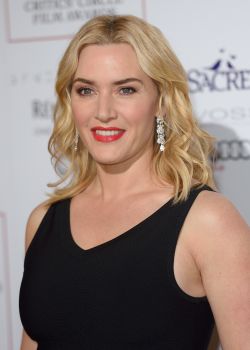 Ask Kate Winslet what she likes about any of her characters, and the word "ballsy" is bound to pop up at least once. The British actress has made a point of eschewing straightforward pretty-girl parts in favor of more devilish damsels; as a result, she's built an eclectic resume that runs the gamut from Shakespearean tragedy to modern-day mysticism and erotica.Kate Elizabeth Winslet was born in Reading, Berkshire, into a family of thespians -- parents Roger Winslet and Sally Anne Bridges-Winslet were both stage actors, maternal grandparents Oliver and Linda Bridges ran the Reading Repertory Theatre, and uncle Robert Bridges was a fixture in London's West End theatre district. Kate came into her talent at an early age. She scored her first professional gig at eleven, dancing opposite the Honey Monster in a commercial for a kids' cereal. She started acting lessons around the same time, which led to formal training at a performing arts high school. Over the next few years, she appeared on stage regularly and landed a few bit parts in sitcoms. Her first big break came at age 17, when she was cast as an obsessive adolescent in Heavenly Creatures (1994). The film, based on the true story of two fantasy-gripped girls who commit a brutal murder, received modest distribution but was roundly praised by critics.Still a relative unknown, Winslet attended a cattle call audition the next year for Ang Lee's Sense and Sensibility (1995). She made an immediate impression on the film's star, Emma Thompson, and beat out more than a hundred other hopefuls for the part of plucky Marianne Dashwood. Her efforts were rewarded with both a British Academy Award and an Oscar nomination for Best Supporting Actress. Winslet followed up with two more period pieces, playing the rebellious heroine in Jude (1996) and Ophelia in Kenneth Branagh's Hamlet (1996).The role that transformed Winslet from art house attraction to international star was Rose DeWitt Bukater, the passionate, rosy-cheeked aristocrat in James Cameron's Titanic (1997). Young girls the world over both idolized and identified with Winslet, swooning over all that face time opposite heartthrob Leonardo DiCaprio and noting her refreshingly healthy, unemaciated physique. Winslet's performance also garnered a Best Actress nomination, making her the youngest actress to ever receive two Academy Award nominations.After the swell of unexpected attention surrounding Titanic (1997), Winslet was eager to retreat into independent projects. Rumor has it that she turned down the lead roles in both Shakespeare in Love (1998) and Anna and the King (1999) in order to play adventurous soul searchers in Hideous Kinky (1998) and Holy Smoke (1999). The former cast her as a young single mother traveling through 1970s Morocco with her daughters in tow; the latter, as a zealous follower of a guru tricked into a "deprogramming" session in the Australian outback. The next year found her back in period dress as the Marquis de Sade's chambermaid and accomplice in Quills (2000). Kate holds the distinction of being the youngest actor ever honored with four Academy Award nominations (she received her fourth at age 29). As of 2016, she has been nominated for an Oscar seven times, winning one of them: she received the Best Actress Oscar for the drama The Reader (2008), playing a former concentration camp guard.For her performance of Joanna Hoffman in Steve Jobs (2015), she received her seventh Academy Award nomination.Off camera, Winslet is known for her mischievous pranks and familial devotion. She has two sisters, Anna Winslet and Beth Winslet (both actresses), and a brother, Joss.In 1998, she married assistant director Jim Threapleton. They had a daughter, Mia Honey Threapleton, in October 2000. They divorced in 2001. She later married director Sam Mendes in 2003 and gave birth to their son, Joe Alfie Winslet-Mendes, later that year. After seven years of marriage, in February 2010 they announced that they had amicably separated, and divorced in October 2010. In 2012, Kate married Ned Rocknroll, with whom she has a son. She was awarded Commander of the Order of the British Empire in the 2012 Queen's Birthday Honours List for her services to drama.

The Mountain Between Us